I just started studying FEM in a more structured basis compared to what I used to do during my undergraduate courses. I am doing this because, despite the fact that I can use the "FEM" in commercial (and other non-commercial) software, I would like to really understand the underground techniques that support the method. That's why I am coming here with such, at least for the experienced user of the technique, basic question.

Now I'm reading a quite popular (I think) and "engineer-friendly" book called "Finite element method- The basics" from Zienkwicz. I've been reading this book from the first page but I yet can't understand the concept of shape function in the way Zienkwicz explains it.

What I know about from the things that I'd read is that a "Stiffness" matrix, the one that relates the unknowns with the result ($A$ in: $Ak=b$), has its components from the "relationships between the nodes", and if that "relationship" changes, (i.e. if we change it to a Higher order interpolant), that stiffness matrix changes, because the relationship between the nodes does.

But in this book, the definition is quite fuzzy for me, because in some point it says that you can arbitrarily chose the function as, i.e., the identity matrix: 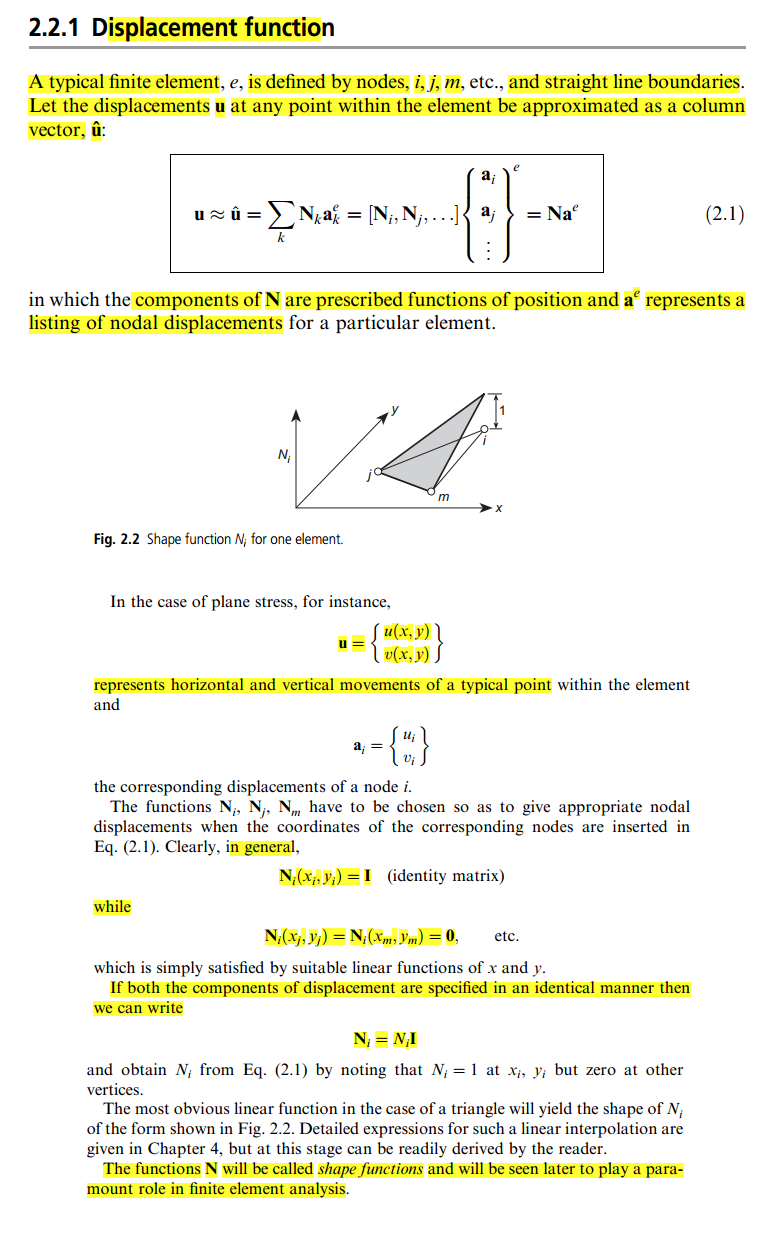 The only explanation I found is in this blog , but it is still not so clear for me. So, somebody can give me a simple plain explanation of what is a Shape functon and how it is done to "put it" in the stifness matrix?

I've always found the approach to describing finite element methods that focuses on the discrete linear system and works backward unnecessarily confusing. It is much clearer to go the other way, even if that involves a bit of mathematical notation in the beginning (which I'll try to keep to a minimum).

Assume that you are trying to solve an equation $A u = f$ for given $f$ and unknown $u$, where $A$ is a linear operator that maps functions (e.g., describing the displacement at every point $(x,y)$ in a domain) in a space $V$ to functions in another space (e.g., describing the applied forces). Since the function space $V$ is usually infinite-dimensional, this system cannot be solved numerically. The standard approach is therefore to replace $V$ by a finite-dimensional subspace $V_h$ and look for $u_h \in V_h$ satisfying $Au_h = f$. This is still infinite-dimensional due to the range space (which we'll assume for simplicity to be $V$ as well), so we just ask for the residual $Au_h-f\in V$ to be orthogonal to $V_h$ -- or equivalently, that $v_h^T(Au_h-f) = 0$ for every basis vector $v_h$ in $V_h$. If we now write the $u_h$ as a linear combination of these basis vectors, we are left with a linear system for the unknown coefficients in this combination. (The terms $v_i^TAu_j$ are exactly the entries of the stiffness matrix $K_{ij}$, and $v_j^Tf$ are the entries of the load vector. If $A$ is a differential operator, one usually performs integration by parts at some point, but this is not important here.)

None of this so far is specific to finite element methods, but applies to any so-called Galerkin method or method of weighted residuals. The finite element method is characterized by a special choice of $V_h$: The computational domain is decomposed into a number of elements of the same basic shape (e.g., triangles; the process is often called triangulation), and the space $V_h$ is chosen such that restricted to each element, functions in $V_h$ are polynomials (e.g, linear in $x$ and $y$). Furthermore, the basis functions are chosen such that they are non-zero only in (the neighborhood of) one of the elements. The point of this choice is that you can build such a basis of $V_h$ fairly easily by finding a basis $\{\psi_j\}$ of the polynomial space on a single reference element (such as the triangle with vertices $(0,0)$, $(0,1)$ and $(1,0)$) and then using an affine transformation to map these basis functions to basis functions on each element in the triangulation. These $\psi_j$ are the shape functions. Usually, one requires that the local basis functions take the value $1$ at only one of the vertices and $0$ at the others (called a nodal basis), which is what the page you linked is talking about. Like any polynomial, these are uniquely determined by a number of interpolation conditions (e.g., a polynomial of degree $1$ on an interval is determined by its value at two distinct points; if the basis is a nodal basis, these values are taken at the vertices), which are also referred to as the degrees of freedom of the element. (The total degrees of freedom can be less than the sum of the degrees of all elements if some have to be fixed to ensure global properties of the approximation such as continuity.)

(Other choices of $V_h$ lead to other methods; in fact, there are spectral methods where the basis functions are chosen such that the stiffness matrix is the identity. Of course, there's no free lunch, so other parts of the procedure become more difficult with this basis. Similarly, there are other interpolation conditions than point evaluations, such as derivative evaluations or averages over elements or sides.)

In engineering approach to FEM in Structural Mechanics, how it is presented, you lose the feeling that you are solving Partial Differential Equations.

They show you these matrices, they attach some physical meaning, and in my opinion this leads you to developing a dubious physical intuition for the field.

It may be helpful to think about the subject it terms of geometry. The solution to a boundary value problem for PDE is some shape. V.I. Arnol'd once said praising Newton's accomplishments in the field, to paraphrase - he did a marvelous thing by creating the field of differential equations by allowing us to reformulate the problems of natural sciences to geometrical problems of curves in plane and surfaces in space.

He said: “I want you, not to be able to make residual with the same basis functions, you used to create the solution.”

(P.S. This story is completely not true, and I urge my readers to find a better explanation of (Bubnov-) Galerkin method, if it exists.)

Basis functions, or trial functions are those that you use to build the solution. You use them to approximate the shape of the solution.

Galerkin wants you to think of functions in abstract way analogous to vectors in ordinary Euclidean space, and using the notion of orthogonality to create enough algebraic conditions to find the necessary parameters to build the solution. These algebraic conditions when all put together create $Ku=f$.

The most important thing to know about "shape functions" is that they describe how the dependent variable(s) you want to calculate (e.g. displacement) vary as a function of the spatial coordinates of the element (e.g. x and y) in terms of some unknown scalar parameters.

Often the shape functions are simple polynomials and the scalar parameters are the values of the dependent variables at the element nodes.

Forming the finite element equations using these shape functions requires a few other fundamental concepts such as establishing a "weak form" of the partial differential equation you are trying to solve.

There is a lot of unnecessary "mysticism" associated with the finite element method so I encourage your approach of trying to get a thorough understanding of the fundamentals.

My take is in lecture 4 at http://www.math.tamu.edu/~bangerth/videos.html . In particular, it gives you an idea of why we choose the hat functions we usually use when we use the finite element method -- namely, because they lead to the important concept of sparsity, even though many other choices of basis functions would have been equally valid.

It explains step by step in a visual way how the Rayleigh-Ritz method works. Writing this article finally helped me to get to understand the shape functions.

as per my understanding.. shape functions are nothing but the relation between field variables and the nodal points.

Assume that our earth is being pressurised with external loads and our earth is goin to crack. by analytical method, we use many formulas and find out that at some part (like assume Asia Continent) the earth is goin to crack. Using FEM method, we divide earth into different countries, states and cities, we mesh each city, and finally join all the cities to form one globe called earth. shape functions is the key which provides a bridge between the meshed cities to form a state and country and finally globe. it is the link that connects the mesh. Once this is done load is applied and exact place can be found wher crack starts and that can be strengthened.

hope this helped you.

As per what I understand about shape functions is that, it is the about connecting the geometrical nodal coordinates with Element displacement with a same shape function.

Consider a 1D case. A bar with 2 nodes at it ends.

So, basically shape functions are the approximations that we do in order to find deformation at any point in space in a commendable way.

3
Understanding Finite-Element Modal Analysis
6
Does this Algorithm (probably Fourier like) Exist for 2D Shapes?
4
Gradient of a vector on a triangulated lattice
1
What is the relationship between shape functions, interpolation functions, and degrees of freedom?
1
Is there a difference between the Galerkin MWR and other techniques called Finite Element Method

3
How to treat hexahedral element with shifted hanging node?
2
Basic Finite Element Method (FEM) question: assembly and re-assembly
5
How much measure theory should I know to understand the proofs in Brenner & Scott's FEM book?
3
Meshless Methods and the Kronecker Delta Property
12
In FEM, why is the stiffness matrix positive definite?
2
How does one calculate reaction force in FEA?
3
Parallelizing FEM for elliptical PDEs with n >1
4
What are all these functions in FEM? Shape function vs Basis Function vs Trial Function vs Test Function vs Interpolation Function