Sorting eigenvalues by the dominant contribution

[Edited to simplify the question]

I am trying to associate the eigenvalues $E$ of a matrix $H$ to the original rows of the matrix.

Moreover, it would be trivial to sort the eigenvalues in ascending order, however this throws away some of the information. For my purpose the matrix is a Hamiltonian where the different rows have physical meaning. I always want the eigenvalue that corresponds to a given row.

The sorting approach works fairly well when the eigenvector matrix is dominated by the diagonal. However, if the matrix is more homogeneous the this sorting method fails.

This leads me to believe that my method of sorting is probably incorrect. Or I am running in to accuracy issues with the eig function.

Does anyone have suggestion on an alternative way to sort by the dominant contribution?

(NB I have removed two rows and columns because I am not interested in their effect for by purpose.) 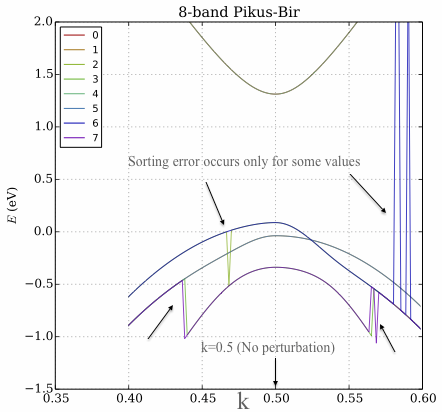 Figure: In the plot the y-axis is the eigenvalues, the x-axis corresponds to a k-space vector which changes values in the Hamiltonian. A definition: at $k=0.5$ the system is unperturbed and the eigenvectors are dominated by the diagonal terms. This also illustrates why I cannot do a simple energy sort: because at some points the bands cross. The bands have different physical meaning which I want to preserve.

Comment. The sorting approach (the Python code above) works fairly well when $k=0.5$ because the contribution is dominated by the diagonal of the eigenvectors. However, moving away from the centre of k-space ($k>0.5$ and $k<0.5$) the eigenvector matrix becomes more homogeneous and this method of sorting fails. I am surprised that it is failing intermittently.

You'd like to sort eigenvalues/eigenvectors in a way that is continuous as you move through momentum. This highly constrains the sorting - for most k-points, you must sort the eigenvalues to be a close as possible to the eigenvalues from a neighboring k-point. Only at eigenvalue crossings are you allowed to permute the order of bands. Furthermore, in many scenarios crossings don't actually occur - instead, with sufficient resolution, you would see an "avoided crossing", and true continuity of the eigenvalues would require the eigenvalues to stay in increasing order throughout. In the case of avoided crossings, it may still make sense to allow the band assignment to swap, depending on your situation.

One situation where true crossings due occur is if your bands have different symmetry representations, and thus cannot mix. In this case, you can order your eigenvectors first by symmetry sector and then by increasing eigenvalues.

If you cannot use symmetry, then I'd suggest the following strategy:

Pick a initial momentum point, and sort the eigenvectors at that point based on increasing energy. For each additional momentum, match each eigenvector with one at the previous momentum point by finding the maximum overlap. If the momentum spacing is very small, these identifications should only allow changes in order at a level crossing.

Not the answer you're looking for? Browse other questions tagged simulation eigensystem eigenvalues sorting or ask your own question.