My jacobian is sparse and ill-conditioned (condition number ~ 1E+14). For a system of 4 ions and three control volumes an schematic Jacobian looks like this: 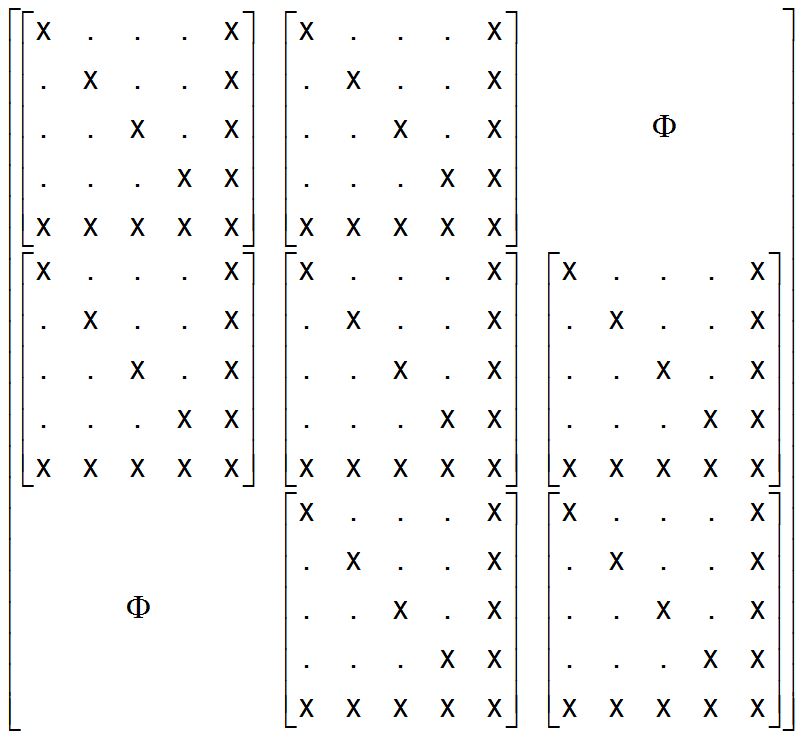 I use Newton-Raphson method to solve it. The timesteps don't go larger than 1E-7 seconds and eventually it doesn't converge and crashes. In the mean time when I pause the run and check the results they are not correct.
One solution that I found was to assume $\epsilon/F = 0$ as $\epsilon/F \sim 1E-14$). In this case condition number becomes ~1E+12 although after ~ 2000 timesteps condition number jumps to 1E+30. But the code goes to larger timesteps (up to 1E-3 second) and the result seems right but not very precise. I need to speed up the code as this timestep is not practical.

For the past few months, I've been working on a similar problem. I only solve the steady-state potential equation for the moment, assuming homogeneous, steady-state ion concentrations.

Scaling your equations is going to be a rudimentary preconditioner. I found that I got good results using algebraic multigrid (AMG) for preconditioning instead, since my problem reduces to a coupled reaction-diffusion equation (i.e., a Poisson problem with nonlinear source term). You might try incomplete LU (ILU) to start, because it is a robust, slower preconditioner, and if that works, then try other preconditioners like AMG.

Using a direct solver might be helpful, but it really depends on the size of your problem. Even sparse LU decompositions will exhaust available memory due to fill-in for problems that are sufficiently large (that point occurs somewhere in the neighborhood of 100,000-1,000,000 variables). If your Jacobian matrix is rank-deficient (as was the case in my problem, due to a nonconductive filler material in some cells), then direct methods will also have problems.

A single higher quality guess for the nonlinear solver won't help. Your problem is transient, so you'll need a guess for every time step, if you're using an implicit method (and given that it's a diffusion problem, you probably should be, unless you want your time steps to be severely limited by the diffusion stability limit). Established libraries that implement numerical integration methods (i.e., time-steppers) do a good job of constructing initial guesses for each time step, and if the guesses are not great (they're typically derived from a problem-independent heuristic), the time steps will be reduced to preserve accuracy.

Quad precision might be helpful, if your problem defies preconditioning. There aren't many libraries I'm aware of that use quad precision. PETSc does, but I believe if you configure with quad precision, you're limited to PETSc-native solvers and preconditioners.

If you write your system as a single matrix, you may need to scale the two equations so that they have roughly the same order of magnitude. Rather than describing in great detail what to do and why, let me simply link to an example where we have done this: http://dealii.org/developer/doxygen/deal.II/step_32.html#Thescalingofdiscretizedequations

Not the answer you're looking for? Browse other questions tagged sparse-matrix poisson newton-method jacobian or ask your own question.