Optimization of prime factorization in C

I am trying to teach myself some programming in C by doing the problems of project Euler. I am trying to find the largest prime factor of the number 600851475143 (Euler problem 3). I have written a code which successfully does this for numbers which are not too large:

But it fails to work for large numbers, probably because it has been programmed horribly inefficient. I was wondering if you can help me think of a way to improve this program such that it is able to handle large numbers in a reasonable amount of time. All tips are welcome!

Whether your code is efficient or not, it will not work for any numbers over 32767 as written. This is because the int data type is a signed type of 16 bit length. One bit is used for the sign and 15 are used for the value of the integer, making the largest storable integer 215-1=32767. If you wish to support numbers larger than this, you will need to use a different integer type such as long. Assuming you do not need to store negative integers, you should also use an unsigned type such as unsigned long or even unsigned long long which can store integer values up to 232-1=14294967295 or 264-1=18446744073709551615 respectively.

Edit:
As @Ahmed pointed out in the comments, the C standards do not specify the sizes of integer types so portability can be a problem. To make sure you get the behavior you expect, I would suggest including the <inttypes.h> header. <inttypes.h> subsumes <stdint.h> and includes additional macros, especially relating to I/O. As described here, <stdint.h> defines the types:

These types are portable and reliable across architectures and compilers. I think using an external library is overkill in this case, but if needed, you can see @Ahmed's link in the comments.

Since Doug has pointed out the need for a bigger integer datatype to do the problem you want to tackle, let's talk about the logic of your program and improvements.

Your approach is (A) input alpha as the number to factor, (B) make a list of all prime numbers less than alpha, and (C) see which of these divide alpha and add the ones that do to an array primefac[ ].

This factoring technique is a version trial division. That is a good place to start, at least when you know that alpha itself is not a prime, something you probably want to assume from the context of the Euler Problem. However there are relatively simple and fast ways to be sure that alpha has factors (is composite) before we knock ourselves out trying to factor it, so for general purposes you might want to look into the Miller-Rabin primality test. But that can be another Question.

The basic thing to fix in your program (after longer datatypes) is checking for repeated prime factors. Once you determine that a prime divides alpha, you just continue with the next prime. This means you never determine how many times a repeated prime factor occurs in alpha, and that may be fine for your application, but it also means you never take advantage of making alpha smaller by any of the prime factors that divide it. Smaller numbers to check generally mean fewer checks to make, as we explain in the next paragraph.

Moreover you are using trial division to build the list of primes to check for divisibility into alpha. This is overkill. You do treat 2 as a special case (known prime), but then you start checking all the consecutive integers starting with 3 for primality. As Godric commented above, you can easily increment by 2 instead of 1 when creating prime candidates, since there will never be another even prime.

So I recommend these steps:

(2) Using the possibly revised value of alpha from the last step, find out if it is divisible by 3, and if so set alpha = alpha/3 until alpha is no longer divisible by 3.

(4) The stopping criterion, that T is greater than the square root of current alpha, does not require a square root operation. Instead it makes sense to check whether alpha/T is less than T and stop if that is the case. This is fairly efficient because you would compute alpha/T anyway in the course of checking (exact) divisibility by T as your code already does it, asking if alpha == (alpha/T)*T.

Examination of your attempt

Since you are trying to teach yourself C, let's actually show you what the issues are in your code and show you how to attack this problem properly utilizing the complete power of C.

The following declaration is useless

The declaration below should be ANSI compliant

For instance a function that takes a number and finds all primes using whatever method, that way you can start out with a simple function and as you learn better methods you can actually make that routine faster.

The block below has many issues.

Using for loop the way you did above is poor form and you should not use the printf statement on the same line.

Generally speaking: Your tabing and block style is inconsistent when you are coding you should use a consistent way to mark your blocks code is read far more often than it's written using a consistent style helps follow the logic

Dynamic arrays are not supported in C. The code below is not standard. if your platform/compiler supports it you will get inconsistent results when you port the code.

The block below has many problems.

The else below is completely not required by any logic

Same issue as above

This should line up with the main function }

Okay now let's figure out how approach this problem correctly.

In C the modulo operator (%) (actually it's the remainder operator) provides the necessary capability.

I will not provide you with a solution but walk you through some basic concepts.

First things first, it's a good idea to split things up into smaller chunks and treat each as a function. If you define your approach step by step then a good rule of thumb is to create one function per step. If it's a complex step, with simpler substeps, then that function should be divided into multiple sub functions. You may not get it right the first time, that's okay, you will develop better judgement as you go along as to how things should get divided up. 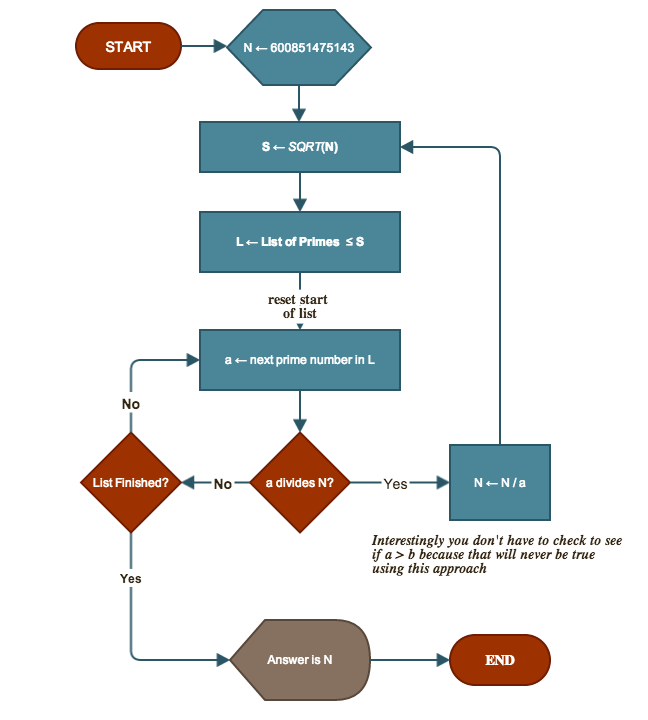 Now essentially each box in the flowchart above is going to the statements of your main function:

Furthermore you only need to check primes up to the square root of your target number. So say you want to factor a number N, you only need primes up to sqrt(N) since its guaranteed if the number is not composite that one factor will exist on that interval.

Here is an example:

Say you want to find all prime numbers less than 100. We just need to generate primes 2,3,5,7 through a process of your choice. and then if you write out all the numbers from 8 - 100, and just cross out the multiples of 2,3,5 and 7 (without considering ANY additional primes) the only numbers that won't be crossed out will be the remaining prime numbers.

Thus to simplify your work:

In order to handle large numerical datatypes i recommend either importing externally OR:

take a look at the vector class (well thats c++) and if thats off limits to then you are going to want to create a numerical type function which essentially converts a string ('101101343433') into a linked list of digits and then create functinos for adding, subtracting, dividing, and multiplying over this linked list device.

When you generate your list of primes multiply every k consecutive primes together (choose k as something such that the average size of the numbers yielded has the same number of digits as the number you want to factor). And then find the GCF of this target number and your groups of k primes multiplied together. The punchline here is that instead of having to do k separate modulus checks (is Num % prime == 0) or in your case k seperate divisions and multiplications you do k smaller multiplications (since they are smaller numbers) thereby shaving off some time. The euclidean algorithm should be used to find GCF.

Thus here is an example for the checking the factors of the number 143.

2,3,5,7,11 (these are all primes less than sqrt(143) generated using the same eratosthenes protocol that you have in your code (the sieve of eratosthenes is the formal name for the trial division algorithm you have implemented) )

13 is the largest factor.

There's a more advanced version of the Pythagorean sieve that tracks patterns of composite numbers, and uses those patterns to reduce the number of necessary tests.

At this point you have covered the interval [0,29]. The next number 30 = 2*3*5. You might be noticing a pattern here. We consider ever expanding groups, all nested within the next larger interval, which will be the product of the first N+1 primes.

To save space you can record flags, indicating which numbers are composite or not, as individual bits within integers.

If you're interested in other simple algorithms for prime testing, you can check Pollard's Rho algorithm. It's a little abstruse but easy to implement. Wikipedia has a nice article describing it.

Not the answer you're looking for? Browse other questions tagged c or ask your own question.