Stack Overflow for Teams is moving to its own domain! When the migration is complete, you will access your Teams at stackoverflowteams.com, and they will no longer appear in the left sidebar on stackoverflow.com.

Check your email for updates.

How does one determine the point group of a molecule?

You've managed to finally find out how the atoms are spatially arranged on your newly-discovered molecular entity. Through, say, spectroscopic means, you are now in possession of a bunch of atom coordinates, atom types, bond lengths, bond types, and whatnot for your molecule. You are now interested in determining the point group (symmetry group) of your molecule.

For simple molecules like methane ($T_d$) or benzene ($D_{6h}$), it is a simple matter of visual inspection to determine the point group in which a molecule belongs. However, this isn't so feasible when the molecule is a bit on the large side.

Given a molecule stored in some convenient data format (*.pdb, *.mol, etc.), how do you algorithmically determine the molecule's symmetry group?

My primary experience is with crystal structures, and there is only a finite number of point symmetries that show up in a crystal. So, the algorithm I would use is slightly different than what you'd use in a molecule. But, it is unlikely with a large molecule that the continuous symmetries will show up, like the axial symmetry in H$_2$ or CO$_2$, so the methods should overlap quite well. When determining the symmetry in a system, there are two different, but related, symmetries to consider: local and global.

Local symmetry is the symmetry of the local environment around a specific point. In particular, the symmetry at each atomic location determines the local atomic splitting and to some extent the chemical environment, and is a subgroup of the global symmetry. For example, in benzene the local symmetry consists of two reflection planes and a $C_2$ axis ($180^\circ$ rotation symmetry). (Obviously, only two of the operations are necessary to generate the entire local point group.) 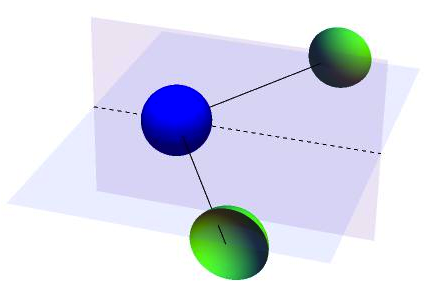 From an algorithmic perspective, what we've done is to first find the nearest neighbors of the target atom, and then enumerate all the ways we can rotate that environment about the central atom and have it remain the same. More mathematically, it is solving for all orthogonal matrices, $\mathbf{A}$, such that

where $\vec{x}_i$ and $\vec{x}_j$ are the positions of atoms of the same species and $\vec{x}_c$ is the position of the central, or target, atom. But, I'd look at simpler forms first, like whether or not a reflection plane exists, prior to trying to solve for $\mathbf{A}$ in general.

Another thought is to use the angular momentum matrices as generators of rotation, then

Where the local symmetry determines the environment around a single atom, the global symmetry dictates how the atoms interchange with each other. The first step in determining the global symmetry is to determine the equivalent atoms. First, determine the types of and the relative directions to the nearest neighbor (and second nearest, or higher, if desired) atoms. Two atoms are then equivalent, if their neighbors have the same spatial arrangements. This is straightforward to calculate.

The second step is roughly the same as that found in the local symmetry case, except that the center of mass of the molecule is likely the symmetry center. At this point, if the local symmetries have been determined, only a few unique operations may need to be found to generate the entire group. For example, in the B20 crystal structure, each atom has a local $C_3$ symmetry, and the full point group is generated by including a 2-fold ($180^\circ$ rotation) screw axis which transforms one atom into another. In benzene, two operations are required: a 6-fold ($60^\circ$) rotation through the central axis and a reflection plane bisecting a bond.

Edit: For the B20 structure, you can use two of the $C_3$ axes, instead, to generate the full group. This should allow you to avoid having to figure out a way to automatically determine the screw axis.

Caution: A caution on using the ideas in the local symmetry section in the global section, to be a symmetry operation, the environment must also be transformed. So, that if you find $\mathbf{A}$, from above, it will only give a candidate symmetry as the transformation may not similarly change the environment appropriately, and further checks are needed. For instance, if the benzene ring had hydrogen atoms sticking out of the plane of the ring along one side, then the reflection plane bisecting the carbon-carbon bond would be fine, but a $180^\circ$ rotation similarly bisecting the bond would not because it would not reproduce the local environment.

Edit - Translations: There is one other complication that the above discussion on local symmetry ignores: translations. Formally, the correct symmetry operation is

There's old code for the purpose that's used in a few packages, called SYMMOL. The algorithm it uses is described in the following paper:

Basically, it determines the centre of inertia, then applies possible symmetry operations and attempts to determine whether a transformation vector exists to map the operated geometry onto the original within a given tolerance. The code itself is no longer available from the authors' site, but it is available (with a set of example input files) here.

I'm happy to answer that there's a high-quality open source code for this:

libmsym is a C library dealing with point group symmetry in molecules. It can determine, symmetrize and generate molecules of any point group. It can also generate symmetry adapted linear combinations of atomic orbitals for a subset of all point groups and orbital angular momentum (l), and project orbitals into the irreducible representation with the larges component.

I have adapted libmysm into Avogadro and a release should come out later in August 2015.

I believe the author is currently working on finishing a manuscript about the details. I'll revise this answer when it's published.

I once wrote a small Python script to detect the point group symmetry for a molecule. If you're interested, please see https://github.com/sunqm/pyscf/blob/master/pyscf/symm/geom.py

If you're still interested in this, I have a python script that will give you the (Abelian) point group (and symmetrically non redundant) atoms of any molecule within a specified tolerance.

The difference between my routine and a lot of others I've seen available is that the initial orientation is not important, making it useful to run in the results of geometry optimisations where you haven't specified an initial point group (as often, making an assumption like this can limit the geometry, forcing it to be symmetric and giving non equilibrium ground state.)

There are some software packages, such as Materials Studio, that can automatically identify the point group of a molecule for you. However if you want to figure it out yourself, there is a nice flowchart that will will walk you through the process. You can also look at the Otterbein symmetry website for some tutorials and and interactive demos.

3
How does Gaussian 09 handle 'Frozen Core Approximations' and how does it compare to CFour handling?
11
Why does iteratively solving the Hartree-Fock equations result in convergence?
13
How can one mathematically describe the "cartoon" type of representation of proteins?
1
How to manipulate dihedral angles in pre-optimized molecule coordinates?