I discretized my domain in time ($t$) and space ($x,y$). What I already have now is a big equation system. The matrix has full rank. For a grid with only 3 nodes (=27 nodes overall, =81 equations) in each direction it looks like this 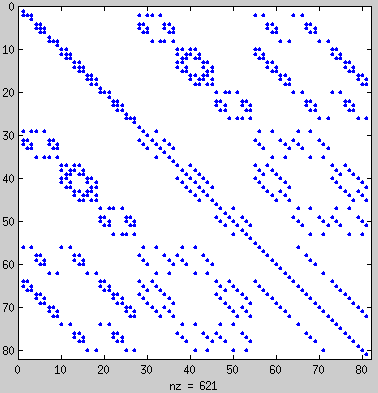 When increasing the number of nodes the system gets to big very soon for my computers memory. That's why I actually want the system matrix to be symmetric in order to use Cholesky factorization (hopefully) or something else. But I am not sure if there exists a numbering of nodes which would make the system matrix symmetric.

In literature the commonly used example is the Laplace equation, where they just use a symmetric stencil in order to approximate $\Delta$. In contrast to that I have to use one dimensional finite difference for the approximation of e.g. $\partial_x^2$ in a 3 dimensional space. Furthermore I am using one-sided differences for the mixed derivatives at boundaries, which might destroy symmetric. However I am not sure if this really destroys symmetry.

Only because I found this thread I've got the hope that there is a numbering of my nodes, which would make my system matrix symmetric. But actually I cannot imagine that, because a non-symmetric matrix cannot become a symmetric one by only permuting rows and columns in the same way.

So is there a way to get a symmetric system matrix for my problem? If not, what would you do instead in order to solve the system?

The differential operator is "grad after div" and so (in the continuous version) is symmetric and negative semi-definite. To get a symmetric discretization your discretization of the gradient has to be the (negative) adjoint of your discrete divergence. With finite differences this says, for example, that forward differences for the divergence imply backward differences for the gradient. Boundary conditions need special care.

Can you use timestepping instead of discretizing in time? You have a second order time derivative, but you can rewrite that as a first order system, i.e. $\frac{\partial^2 u}{\partial t^2} = f$ can be rewritten by adding another equation

and then use time-stepping methods for first order systems ODEs. This way, you'd end up with only a 2D discretization and not a 3D one (which saves a ton of memory).

Not the answer you're looking for? Browse other questions tagged linear-algebra finite-difference boundary-conditions matrix symmetry or ask your own question.

9
Are there any numerical advantages in solving symmetric matrix compared to matrices without symmetry?