I came across a puzzling remark in the paper

where Taylor polynomial refers to the stability polynomial (truncated expansion of $\exp(x)$ around $x=0$) of the Runge-Kutta method and p is the order (see page 263). I assume that I misunderstand something because the fifth-order Runge-Kutta method does not have an empty imaginary stability interval as far as I know. From what I remember, the imaginary limit is about 3.4 or so.

van der Houwen's statement is correct, but it is not a statement about all fifth-order Runge-Kutta methods. The "Taylor polynomials" he is referring to are (as you seem to know) just the polynomials of degree $p$ that approximate $\exp(z)$ to order $p$:

For the fifth-order polynomial, it turns out that $|P_5(i\epsilon)|>1$ for small $\epsilon$, so the stability region of a method having $P_5(z)$ as its stability polynomial does not include any neighborhood of the origin on the imaginary axis. That is, in precise terms, what van der Houwen says.

Finally, it is easy to make mistakes when determining the extent of the imaginary stability interval for high-order Runge-Kutta methods. That is because the boundary of the stability region for such methods lies extremely close to the imaginary axis. Therefore, roundoff errors can lead to incorrect conclusions; only exact calculations should be used (of course, the relevance of the stability region boundary for practical purposes under these circumstances could certainly be debated).

For instance, here is a plot of the stability region of the fifth-order method from the Fehlberg 5(4) pair: 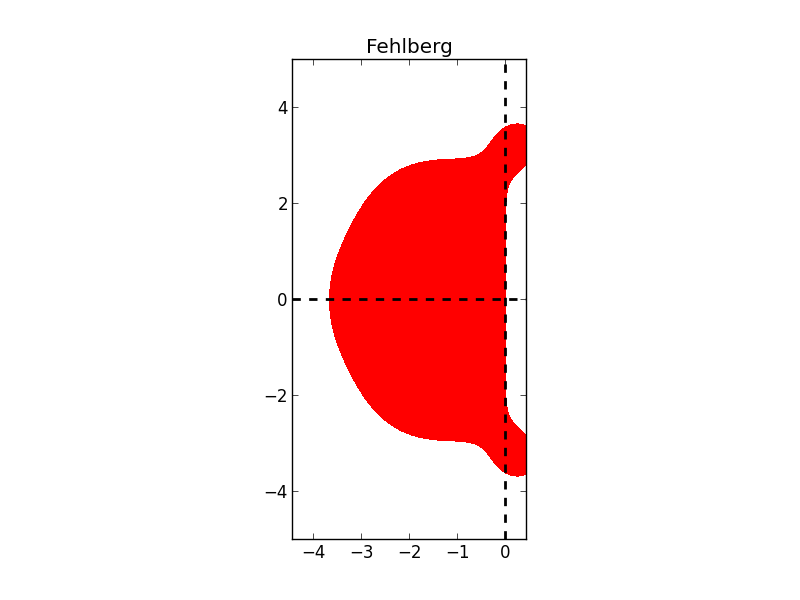 The imaginary stability interval is empty, but you can't tell from the picture at this resolution! Note that the region clearly includes part of the imaginary axis, but no interval about the origin.

Meanwhile, here is the plot for the fifth-order method from the Dormand-Prince 5(4) pair: 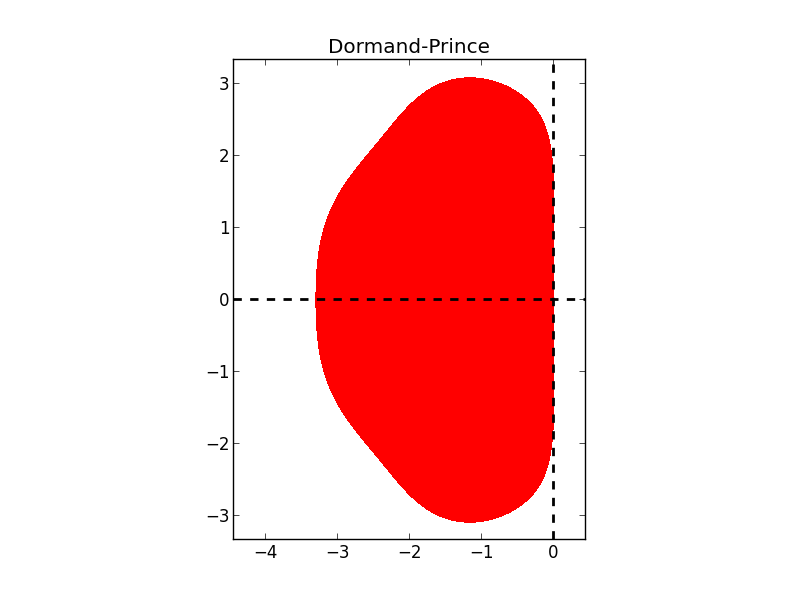 It has imaginary stability interval approximately $[-1,1]$.

For a precise characterization of the stability region boundary near the imaginary axis for $P_p(z)$ (which is rather fascinating!), see my recent paper.

You may also be interested in the NodePy package, which produced the plots above and which can be used to accurately determine things like the imaginary stability interval of a method (disclaimer: I created NodePy).

Not the answer you're looking for? Browse other questions tagged numerical-analysis stability runge-kutta or ask your own question.