What is the corresponding LAPACK function behind Matlab [Q,R,E]=qr(A)?

I currently trying to cheaply compute a good rank estimate for a matrix $A$. Therefore I compute a columnt pivoting QR decompostion using

in Matlab. I estimate the rank of $A$ using

This works fine and a plot over all diagonal entries of R looks like: 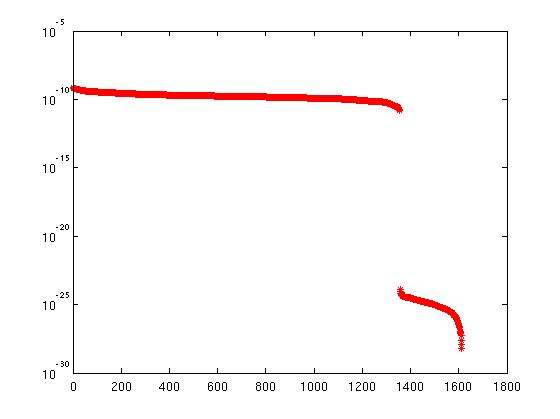 If port the whole algorithm to C/Fortran I replace [Q,R,E]=qr(A) using DGEQP3 from LAPACK, which also computes a column pivoting QR decomposition. But if I use the same estimate for the rank I mostly get something wrong. The same plot for the $R$ produced from DGEQP3 looks like 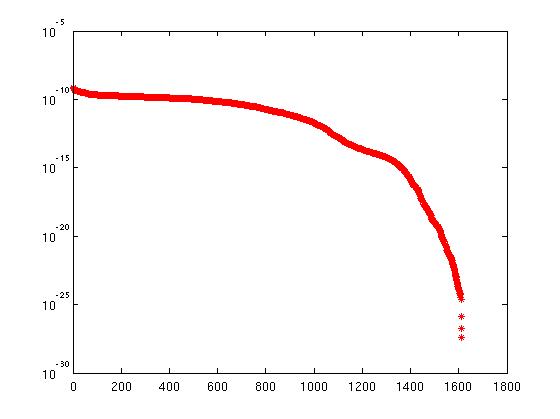 The input matrix is exactly the same for both experiments.

My question now is on which LAPACK function does the column pivoting QR decomposition from Matlab rely on?

Thanks for any help, Grisu

There are two issues at hand here:

MATLAB no longer explicitly mentions the LAPACK routines it calls to obtain a QR factorization if $A$ is dense. If the information in the documentation for MATLAB R2008b also holds for later releases, then MATLAB calls DGEQP3 from LAPACK when you call [Q,R,E] = qr(A). If $A$ is sparse, then MATLAB calls SuiteSparseQR, out of Tim Davis' group, which is bundled with UMFPACK in the SuiteSparse library.

Do you have the same software stack as MATLAB's internal libraries?

Probably not, which may be one reason you're getting different results.

I ran into this issue when unit testing a library I was writing that used QR factorizations. I used MATLAB to prototype my work and got different results than using LAPACK or NumPy. As far as I can tell, because MathWorks doesn't make this information easy to find, MATLAB uses a verson of LAPACK no earlier than version 3.1.1, and Intel's MKL BLAS library (for Windows, Intel Mac, and Linux) version 9.1 or higher (see here). I couldn't find anything about the version of SuiteSparse MATLAB uses. By digging around online or looking at the library files for your system, you may be able to glean additional information. You could try changing the libraries that MATLAB links to in order to be able to compare with the same libraries across software packages; Eric Chu provides a nice write-up that shows at least how you can replace MATLAB's BLAS library with your own (of course, you do this at your own risk). He suggests that you can do the same thing with LAPACK as well. It may even be possible to replace the version of SuiteSparse that MATLAB uses with your own version.

LAPACK versions change, and so do BLAS versions; they may use different algorithms from version to version, or different ordering conventions, even though $A = QR$ with $Q$ orthogonal and $R$ is upper triangular, regardless of version. These changes make reproducibility a challenge. Even the tolerance you use for your numerical rank determination is a judgment call; you appear to be using a standard tolerance.

I ended up using NumPy to prototype my results for QR factorization, because it uses the system BLAS and LAPACK libraries. NumPy and SciPy isn't a drop-in replacement for MATLAB, because the two libraries combined lack some of MATLAB's functionality, but for this particular linear algebra task, Python + NumPy + SciPy + Matplotlib should work well.

You should be able to find out what routines MATLAB uses by setting breakpoints in a debugger and examining the stack. Last I looked, admittedly several years ago, MATLAB used shared libraries, in which case the symbol names cannot be stripped, so you will see the function names on the call stack (but not arguments because it definitely isn't keeping debugging information).

Not the answer you're looking for? Browse other questions tagged matlab lapack or ask your own question.

13
Understanding how Numpy does SVD

4
LAPACK - singular matrices - what does the positive integer info mean?
31
What is the relationship of BLAS, LAPACK, and other linear algebra libraries?
1
what is difference “DSYEV(LAPACK SUBROUTINE)” and “Lanczos”?
4
Eigenvectors: MATLAB vs LAPACK DGGEV or DGGEVX
0
Matlab, Mathematica & LAPACK returning 3 different eigenvectors
0
How to use LAPACK function (DGELSY) in Fortran
7
Is LAPACK behind the cutting edge of dense linear algebra?