optimization (using python) how to find the most suitable solver?

I have a fitting routine set up. It works, but pretty slow. I was wondering if there is a better method to use. I checked my (forward) code against some literature data and at least I do have no bugs and mistakes in my problem.

I fit the steric mass action model to some some isotherms like the ones shown below. 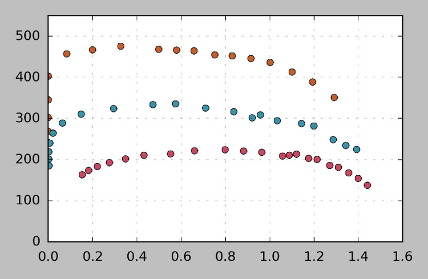 The model for a three component system takes following form. (the first component (the salt concentration) has to be calculated numerically)

$\Lambda$ is initial concentration of ligands; can be a fit parameter; typically between 100 and 1700

$\sigma $ is a fit parameter typically between 1 and 50

Since the solver fails on some sets of input parameters and i do not want to fiddle around, i use scipy`s basin-hopping solver together with the method L-BFGS-B (quite slow). The parameters are bound so they make physical sense. Starting points are generated randomly within the bounded domain.

I was wondering how someone used to optimization would set this problem up ? Would you try to provide an analytical gradient ?

I do minimize the sum of squares. I thought about scipy`s leastsq, but it does not accept bounds. From the local solvers, fmin (using L-BFGS-B) was the most robust and fastest one.

Some general thoughts from someone with optimization experience:

5
Solving a system of nonlinear PDEs by minimization
19
Is it well known that some optimization problems are equivalent to time-stepping?
2
Is there a relatively simple way to extract the Jacobian from a Runge-Kutta 4/5 integrator?
3
Combinatorial optimization problem: choose a set of corrective factors to make a set of points most closely resemble a plane
3
Obtaining a feasible solution for underdetermined system of linear equations satisfying inequality constraints
3
A notion of resolution in inverse problems
4
Parameters estimation with fewer variables than parameters