For example, if we were to solve:

Again we avoid division operations, at least if the fractional constants are pre-evaluated for FP multiplications.

So something of the sort is possible, but I did not find a specific discussion of such methods in my (admittedly shallow) search of the Web. More to the point, I suspect that a clever person has already discovered a better idea and that one of you treasured colleagues has seen it or thought it through.

algorithms numerical-analysis special-functions
Share
Improve this question
edited May 23, 2017 at 12:35

Cube roots are not nearly as important as square roots (e.g., for normalizing vectors), so that might be why they are discussed much less.

In general, if you apply Newton's method to $x^\alpha-\beta$, you get the iteration $$ (1-\alpha^{-1})x+\frac\beta\alpha x^{1-\alpha}, $$ so you just need to pick the equation so that $\alpha$ is negative integer, it's not just cube and square roots, this works for other rational powers as well.

Your scheme only needs 7 iterations to converge to double precision on the interval $a\in[\frac12,1]$ starting from constant initial guess $1$: 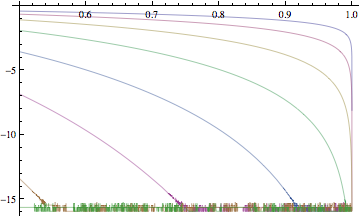 Another interesting thing to consider is what existing libraries implement:

Not the answer you're looking for? Browse other questions tagged algorithms numerical-analysis special-functions or ask your own question.

6
Algorithm for generating all cartesian products, without rotations
15
Is it possible to solve nonlinear PDEs without using Newton-Raphson iteration?
4
Beale's function and newton iteration
3
How to Check a Hyper-Cube for Defects
2
Doubt regarding stopping criterion for Newton method
5
scaling and preconditioning for trust region Newton methods
7
Difference between Gauss-Newton method and quasi-Newton method for optimization
4
Can you compare integer part of two fractions without division?