I am trying to solve a multiphysic problem using finite elements and a Newton Raphson solution scheme. I have two non-linear subsystems that are coupled bi-directionally.

The first subsystem includes an equation that I solve for $p_f$:

This equation becomes very non-linear, due to the parameter $a$ with an exponent of 3! $B$ are body forces and $u$ is the solution of the second subsystem that I am trying to solve. This second subsystem includes the Stokes equation that depends on the gradient of $p_f$. Therefore, both system are coupled bi-directionally.

I am using a Newton-Raphson solution scheme for each subsystem. First, I solve for $p_f$. After convergence occurred, I pass this solution to the second subsystem, which I solve using a Newton Raphson scheme, too. Then, the solution $u$ is passed to the first subsystem ... until the solutions of both subsystems do not change anymore. See the flow chart below. 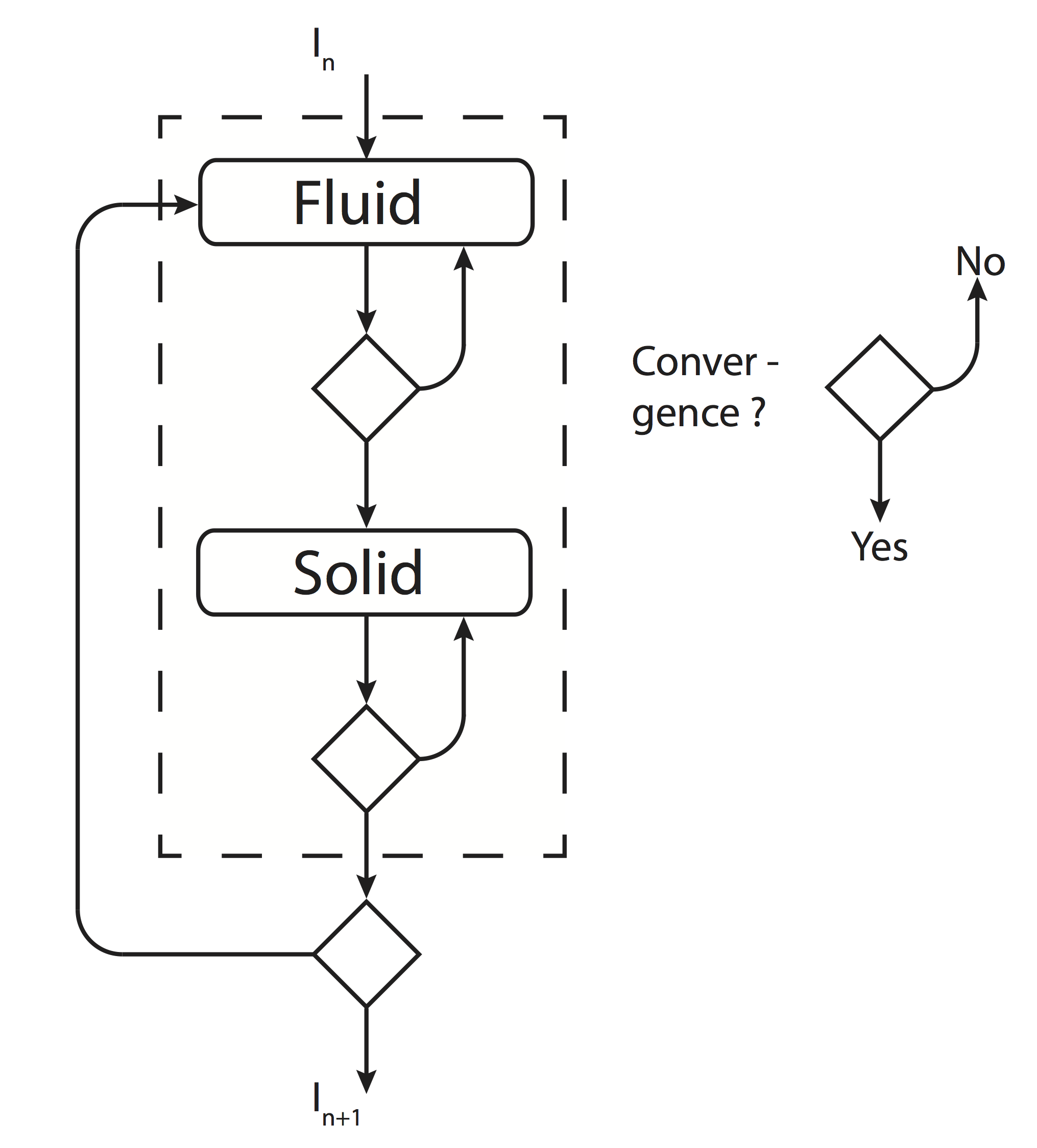 This procedure works very well so far. However, if the values of the parameter $a$ become very low (thus the gradient of $a$ becomes very, very low), there is no convergence anymore! The reason seems to be that the coupling between both subsystem becomes very strong. A small change in one subsystem creates a significant changes in the other one (especially where the gradient of $a$ is very low). I tried a variety of good initial conditions, however, since the first subsystem reacts very sensitiv, convergence has been impossible so far.

In the figure below, you can see how the solution of this approach ("Segregated Approach"-blue line) is different from the "true" solution ("Fully Coupled"-red line). The "true solution" is the result of a benchmark, which I calculated by solving a single system of equations that includes the equations of both subsystems. 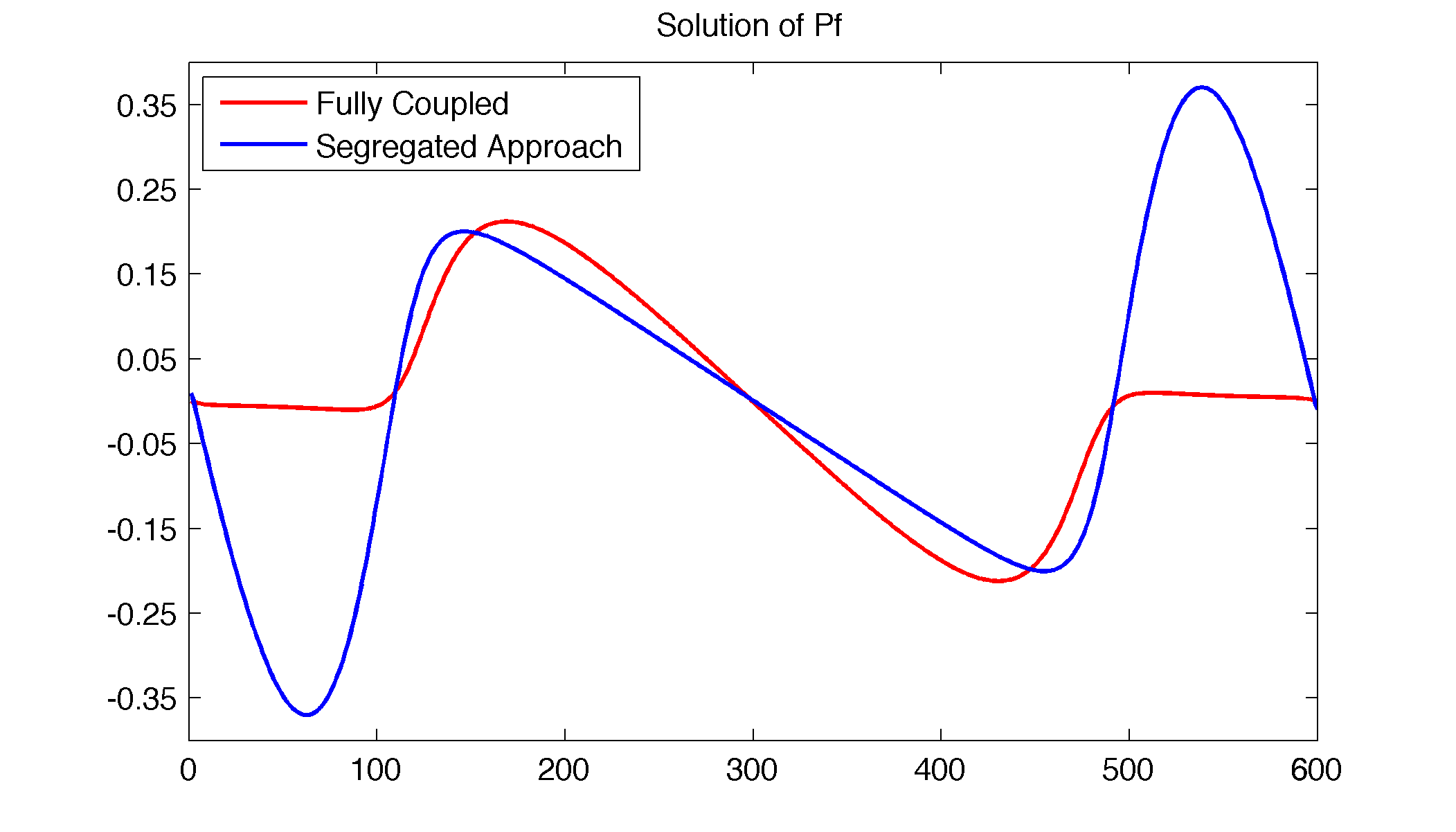 The greatest differences between both solutions are located where the gradient of $a$ becomes very small. See the figure below (in this figure the values of $p_f$ and $a$ are normalized to range between 0 and 1): 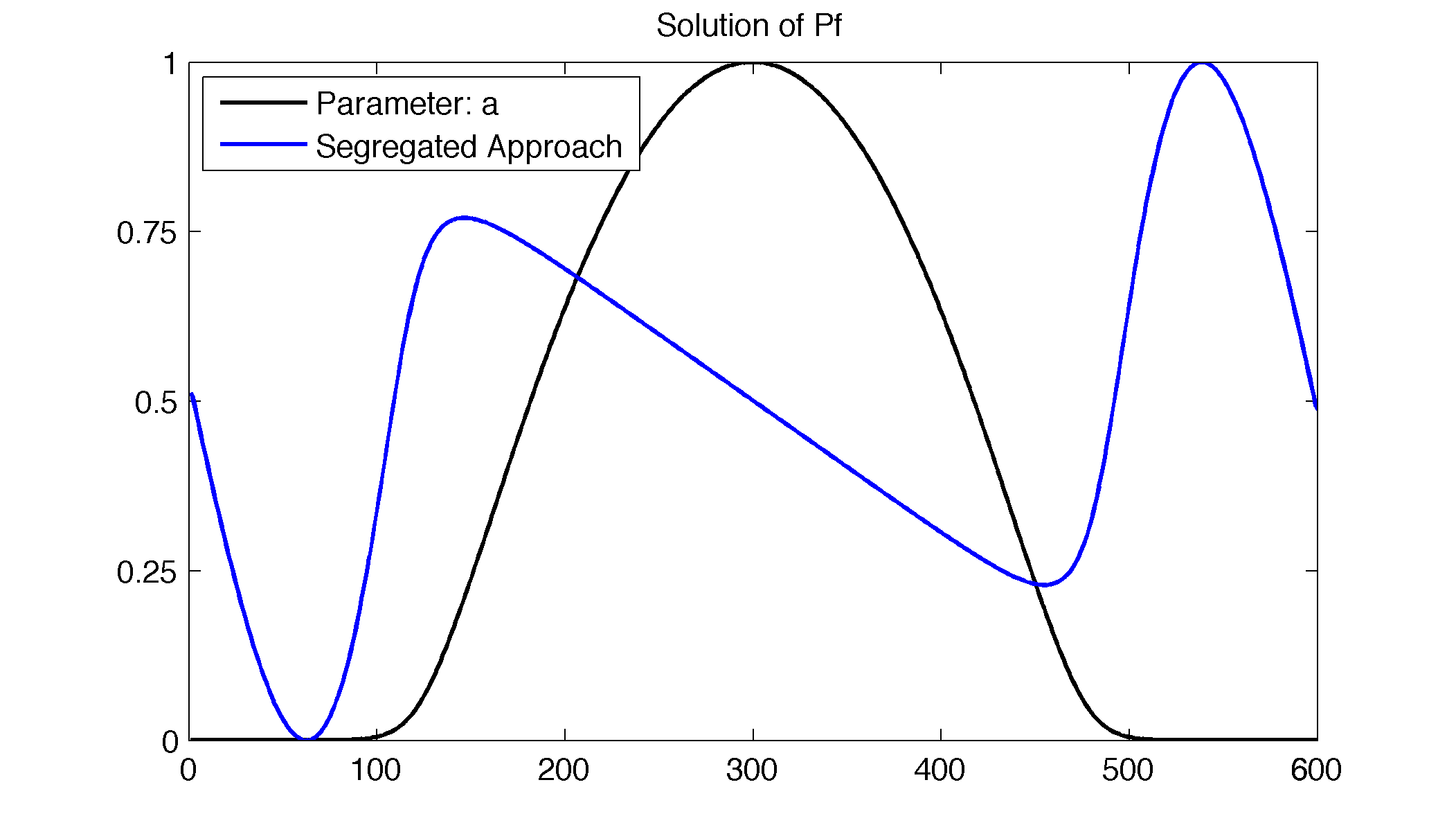 So: Is a Newton-Raphson solution scheme the wrong method for solving a strongly coupled system, if there are low gradients in a subsystem? Could my method be fixed to solve the problem that I described? If yes, how? Are there alternative solution schemes for this problem?

The issues you're running into now are not a failing of Newton-Raphson, but a question of coupling. You're doing iterated sequential coupling -- solving each equation sequentially and then iterating until (hopeful) convergence.

No solver choice in place of NR is going to fix this lack of convergence, as long as you are doing iterated sequential coupling.

It is possible, but unlikely, that this will help much. The issue is that the approximate (block diagonal) inverse will be too far from the true inverse. One potential option is to try Jacobian-Free Newton Krylov to get a better inverse. This is likely to not work all that much better until you start to add off-diagonal blocks to the approximate inverse.

From a practical standpoint -- your best bet is to bite the bullet and find a way to start to include at least some information about how the equations couple in your approximate inverse, i.e. including off-diagonal blocks in your approximate Jacobian for use in a fully implicit coupling scheme.

This is a short answer and mostly a workaround. This could hit you back again later on, but can provide you with a temporary solution. You can try to relax the solution to your Newton-Raphson solver. What I mean by this is do not take the full solution of your non-linear system, but just take a factor of the previous solution and of the new solution (say 0.1 new solution, 0.9 old solution), and use this intermediate solution in your other solver. This means that you would be relaxing your global system of equation (and is similar conceptually to the above answer of using a single Newton-Raphson iteration).

This usually leads to more robust convergence, but it can turn out to be extremely slow.

Not the answer you're looking for? Browse other questions tagged convergence nonlinear-equations newton-method coupling or ask your own question.

3
System of quadratic algebraic equations
2
Newton-Raphson method fails!
3
Solving a system of nonlinear equations with an ODE solver is faster than with the Newton method?
9
Methods of solving non-linear advection-diffusion systems beyond Newton-Raphson?
1
The linear system in Quasi Newton method
3
Parallelizing Newton-method in solving non-linear systems