I am setting up to solve a 2D Poisson equation $\nabla^2u = T$ by the finite difference method.

Here is the base mesh: 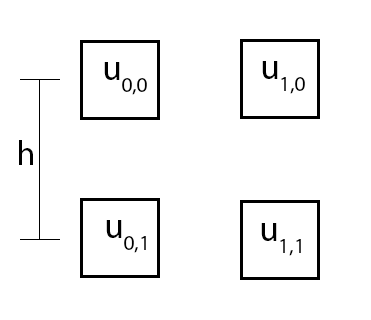 Now I set up boundary "ghost" nodes as so, which will hold the constant values of $T$ and influence the 4 "actual" nodes. 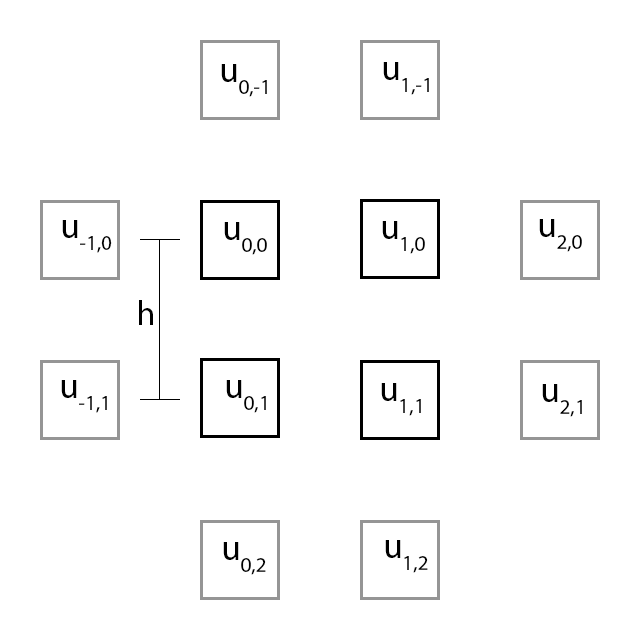 I think this is straightforward. The question I have is - what equation(s) to use for the boundary nodes?

To further clarify with a physical correlation, I am attempting something similar to convection, where $T$ represents a temperature analogue, and $u$ an analogue of vorticity, which will then be used to calculate velocities, which then calculates temperature changes.

Obviously when calculating temperature change for the next time step, it is trivial simply not to update the $T$ values on the boundary and leave them constant. But I'm not sure what to do with the boundaries as part of solving the Poisson equation exactly.

The left hand side of that equation is probably totally wrong, I could forward difference it I suppose in the y-direction, but then do I need to add a corner boundary node, $u_{-1,-1}$ for the x-direction?

In summary, although there are plenty of resources describing how to set up Dirichlet and Neumann boundaries, I couldn't find much on how to set up a constant right-hand side boundary. I'm sure it's trivial and I'm missing something obvious, but I appreciate the help, especially since I have no formal training in any scientific computation.

Which would mean I just stick to central differences. But I still want to define my source term on the outer nodes to get the "heated from below" effect. Should I just redefine $T$ as needed at the beginning of each time step?

Browse other questions tagged finite-difference boundary-conditions poisson or ask your own question.