Both papers link to the paper by Geyer and Herr, which describes this model: 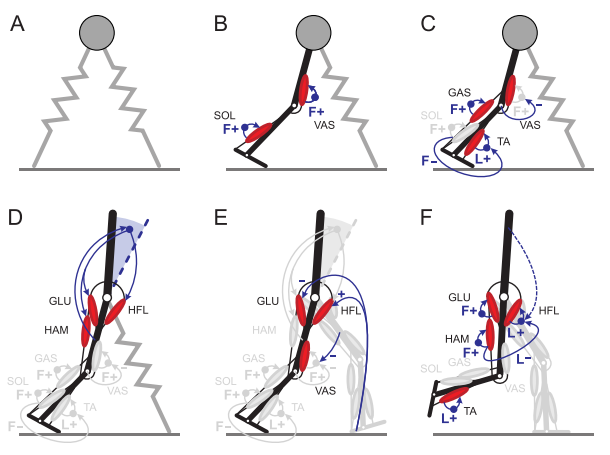 However, the paper on this model assumes you already know how to model a Hill-Type muscle, and are simply augmenting it and placing many copies of it together in a biologically accurate way.

So in trying to learn how to implement the model itself, I found Gribble's Tutorial which was informative, but a very simplified model of what is used in practice.

I also found Prochazka et al's paper, which seems to be the best detailed reference on implementation, however it describes it in the context of a visual language for describing dynamic systems (Simulink). So I have been learning simulink to do this, but once I reproduce the models it will require some kind of Code Generation tool to convert into c code.

I can do this, but I was wondering if there was a better, more standard way to go about implementing a Hill-Type muscle model because the models presented there seemed overly complicated.

I wouldn't mind a description of how to implement one here as an answer, but a simple reading reference will also suffice.

nonlinear-equations computational-biology
Share
Improve this question
asked May 3 '15 at 20:00

Browse other questions tagged nonlinear-equations computational-biology or ask your own question.

7
Numerical method for nonlinear system of algebraic equations of special type
10
How to make a good mesh in a biologically accurate model with very small domains
3
SIRS Model doesn't depend on initial conditions?
1
Grid dependence of a numerical model
0
how to overcome division by zero in the Hodgkin Huxley neuron model