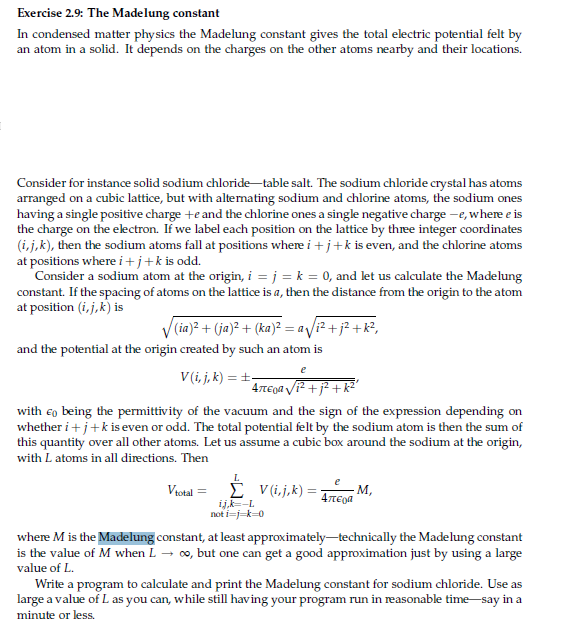 I have two different solutions worked out I wanted to know which code is correct and is there a way to exclude 0 in my range so I don't have to write two separate for loops. I think my second answer is correct can somebody verify.

Below is the code (in C, though) for the kind of loop you can write:

Observe that this loop iterates over cubic shells of radius $n$. This is the way to properly compute the Madelung constant (see Section III of [1] for details).

There is a huge, obvious difference between the two.

But I have no idea which one is correct or how to verify it, because that's a physics question, not a Python question.

Meanwhile, there is a Python question hidden in there:

is there a way to exclude 0 in my range so I don't have to write two separate for loops.

Or, if you prefer, just merge them manually and explicitly skip the 0:

I am working through the same book to teach myself Python. My working code is:

Not the answer you're looking for? Browse other questions tagged python or ask your own question.

5
Fortran code for Ewald summation
1
Is this the correct way to calculate the Madelung constant?