I need to solve a non-linear set of three equations using scipy.

However, I do not have any clue on which algorithm is suitable for my problem from a mathematical point of view (stability, convergence behaviour), since scipy provides a huge variety of different algorithms in the scipy.optimize module such as:

Here is my set of equations (updated version due to comments): 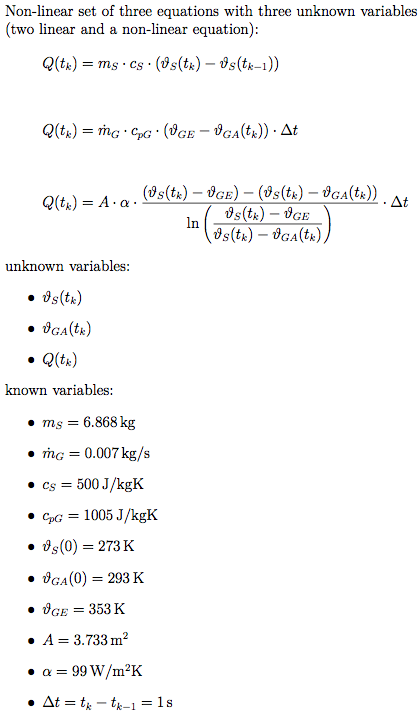 Which algorithm is probably the best one for my problem?

Since your problem is small, you're probably best off trying fsolve or root. Both of these are interfaces to MINPACK and call HYBRD or HYBRJ. Since calculating a Jacobian matrix for your system shouldn't be hard (either do it by hand, or use your favorite computer algebra system, like SymPy, Sage, Maple, or Mathematica), you should supply a Jacobian matrix. The HYBR functions in MINPACK use "Powell's hybrid method", which uses Newton's method and checks if Newton steps will be descent steps by comparing against least-squares minimization (specifically, does the Newton step also decrease the sum-of-squared-residuals). If Newton steps are not descent steps, then it falls back to the gradient of the sum-of-squared-residuals.

scipy.optimize.root is a unified interface for the nonlinear solvers that you list in your third point, which are implemented in Python. On the other hand, scipy.optimize.fsolve is a wrapper around some Fortran functions (see docs). The interface is the same for both and I haven't seen any benchmarks (quick Google search), so just implement the function of the system and give them a go. Focus on correct implementation of this function and on choosing a sensible initial condition and then just try both root with its different methods and fsolve.

Not the answer you're looking for? Browse other questions tagged python nonlinear-equations scipy solver or ask your own question.

16
When is Newton-Krylov not an appropriate solver?
5
Solve rate equations with different reaction orders using SciPy ode
0
Newton method for a nonlinear system of time-independent PDEs
0
Initial conditions for pendulum Jerk equation
5
Can redundant variables be beneficial for root-finding convergence