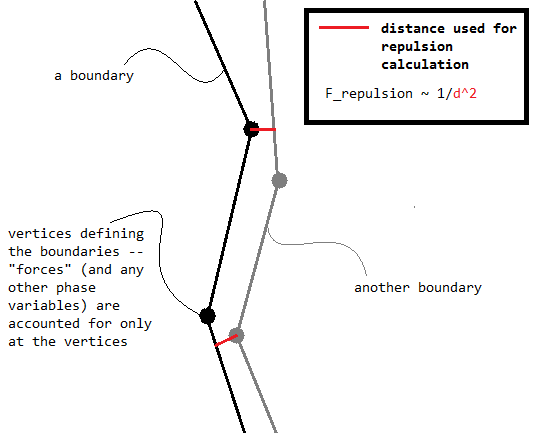 There are two boundaries -- one is denoted using grey lines, and the other is denoted using black lines. The boundaries are numerically represented using "vertices", with edges assumed to be connecting these vertices, but otherwise not necessary for the calculation.

At a given vertex (say, vertex $i$), we can write ODEs of the form:

Here, the $...$ are placeholders for various variables that could be, for example:

In order to model the dynamics of the boundaries, one can integrate the vertex ODEs. For a simple example as shown in the diagram above, we can simply consider the ODEs for all the vertices together in one large system, and then integrate this system of ODEs numerically using integrator.

If the boundaries rarely ever interact (i.e. they are rarely so close as to actually affect each other, depending on how the model is set up), then one could attempt another approximation, in order to lessen the computational burden on the integrator:

Summarizing, this method aims to reduce the "burden" on the integrator by integrating small pieces of the global system at a time, while assuming that the rest of the system has not evolved.

The problem of "volume" exclusion

Maybe the boundaries denote special areas that never intersect: for instance, both boundaries might represent separate membranes which can come very close to one another, but do not intersect. I call this "volume exclusion" (two "volumes" cannot intersect), but perhaps there is better terminology.

In any case, one might implement volume exclusion by assigning repulsive forces to the vertices representing each boundary, where these repulsive forces depend on the distance between a particular vertex and the closest point away from it on the other boundary (see the situation diagrammed above for an example).

There are several issues with implementing such a rule however, with one in particular being how "intersections" (due to numerical error) are handled. If one vertex does end up in the volume contained by another boundary, how do we correct for it without breaking the integration process?

Are there any resources which explore such problems?

1. I believe the usual name for these things is non-penetration constraints. As you say, there is already quite some literature on this, especially in robotics and computer graphics.

2. Your method looked like explicit Euler to me because I didn't notice that you didn't say how you integrated the non-fixed half of the system. So you seem to know what you're doing.

The point is that the scheme is first-order accurate, and, depending on how small $|f_v|$ is (i.e., whether the interaction between the two system parts is the dominant interaction), it might be sufficiently accurate for your purposes. It might break down for a sufficiently stiff ODE, but that's a separate question.

Not the answer you're looking for? Browse other questions tagged numerical-analysis reference-request time-integration or ask your own question.