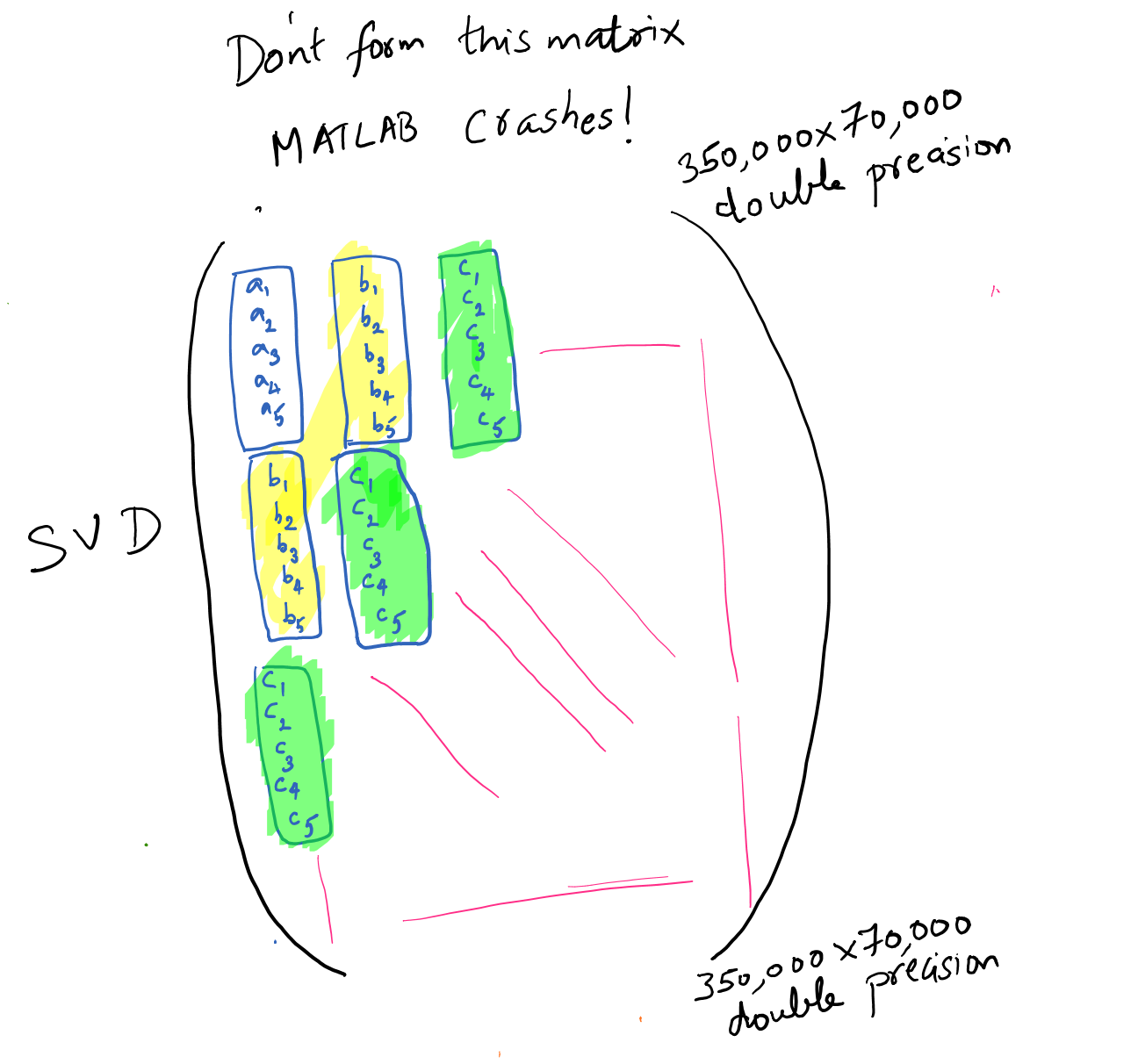 I am trying to do SVD of a large block-hankel matrix for model order reduction (Low rank approximation). However, I quickly run into memory issues in forming the large Block-Hankel matrix and CPU issues due to running SVD itself.

In theory, it seems like we don't have to form the Hankel matrix itself. As long as we have the elements of either the first row/column of the matrix, we have complete information of all the entries of the Hankel matrix, and we should be able to perform the SVD without even forming this large matrix in memory ?

Is there any algorithm (in netlib or any of the other numerical libraries) or any other user-submitted MATLAB package that takes advantage of the special structure of the block-Hankel matrix ?

There are matrix free algorithms (algorithms that use only matrix-vector multiplications rather than working directly with the entries of the matrix) that can compute approximate values of a few singular values/vectors of a large matrix. Since you want a low rank approximation to this matrix, you could use such an algorithm to find the $k$ largest singular values and associated singular vectors.

In order to make this work you will need to develop routines that can compute matrix-vector productions $Ax$ and $A^{T}y$ for your structured matrix $A$.

ARPACK is perhaps the most widely used package in this area. In MATLAB if you have $A$ as a sparse matrix you can use the svds() function which calls ARPACK routines. Unfortunately, MATLAB doesn't seem to provide an interface to these functions that allows you to just provide matrix-vector multiplication routines instead of a sparse matrix.

There's a survey of available software package for sparse eigenvalue and singular value problems that might be helpful to you. I assume that someone has put together MATLAB interfaces to some of these libraries that do have the ability to work with user supplied matrix-vector multiplication routines.

As I recall, PROPACK includes a MATLAB interface that allows for user supplied matrix-vector multiplication routines.

I suggest to avoid the SVD, use Lanczos with Fast Block matrix-vector multiplication via FFTs. You don't need to save the matrix, it is all on the flight. The theory is explained here

Not the answer you're looking for? Browse other questions tagged linear-algebra matlab matrix svd or ask your own question.

1
On the fly/matrix free SVD of large sparse matrix

3
Is a checkerboard block decomposition of a matrix useful when solving a linear system with a parallel conjugate gradient method?
6
Why is Matlab's SVD faster on skinny matrices than on fat matrices?
1
On the fly/matrix free SVD of large sparse matrix
4
Obtaining column vectors of pseudo-inverse of a matrix
7
How to compute the rank of a large sparse matrix in MATLAB
4
Block-matrix SVD and rank bounds
4
Moore-Penrose pseudoinverse of singular rank degenerate matrix
2
Matlab - Fast Computation of Truncated SVD / PCA