I am learning SPH method. At the moment I am trying to implement simulation described in this very good article. However I don't get how the ghost particles properties are computed:

What is the local displacement velocity of the rigid boundary with instantaneous position $\textbf{x}_w$, and what is $\textbf{x}_w$?

I thought that if the boundary is rigid (let's say a solid wall) it will have $U_{nw}=0$, and invariant position. However with those assumptions I don't get the ghost particles similar as described in the paper (it is a part of the Fig 15 from the mentioned paper): 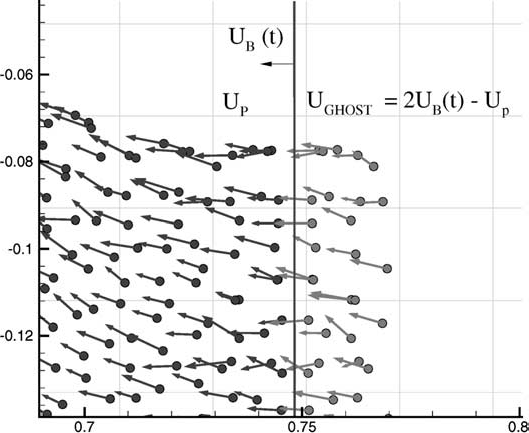 I imagine the figure on the right was generated for a non-zero value of $U_B(t)$. A boundary that is moving left with a certain velocity, at that instant, would give the specific vectors shown in the figure. In general, the boundary does not have to be rigid or fixed. It could be flexible and moving.

Not the answer you're looking for? Browse other questions tagged boundary-conditions sph or ask your own question.