Is it worth switching to timesteppers provided by PETSc if I can't write down a Jacobian for my problem? Case study with “the amoeba” toy problem

I am considering using petsc4py instead of scipy.integrate.odeint (which is a wrapper for Fortran solvers) for a problem involving the solution of a system of ODEs. The problem has the potential to be stiff. Writing down its Jacobian is very hard.

So far, I have been able to produce reasonable speed gains by writing the RHS functions in "something like C" (using either numba or Cython). I'd like to get even more performance out, hence my consideration of PETSc.

Introducing a toy version of the problem: The Amoeba

Consider the following figure, which defines the basics of an amoeba: 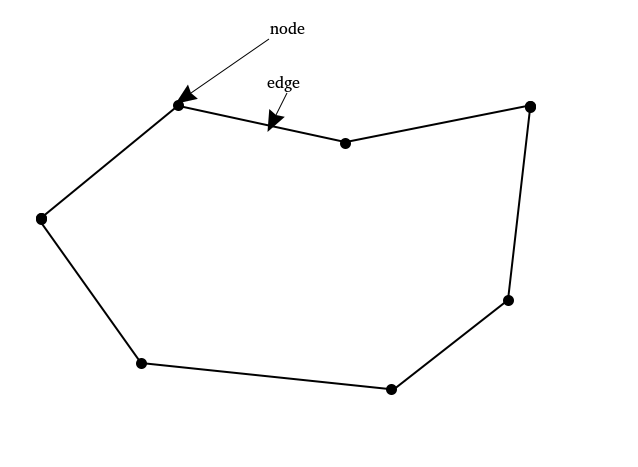 So, an amoeba consists of $N$ nodes and edges, constrained to a 2D space. The position of the nodes describing the amoeba evolve with time.

For the purposes of simplification, assume that the amoeba lives in a world with first order equations of motion, so given an applied force $\textbf{F}$ on a node, the nodal velocity $\dot{\textbf{x}}$ is produced:

where $c$ is a constant I pick.

We are very interested in tracking the position of each node,so immediately we produce $2n$ ODEs (one ODE for each spatial component) of interest (assume that edges are elastic springs):

4) The total number of red balls regardless of location of status is a constant $R$ and similarly for blue balls, a constant $B$

5) When red or blue balls are in the body, they are free to jump onto any node they want, but when they are on nodes, some of them might be induced to move to neighbouring nodes due to some sort of "diffusion"

Okay, you get my point. I can come up with a model that is fairly convoluted in terms of how the various variables of interest interact.

Due to the large number of equations involved, it is already tedious to think about writing downa Jacobian. However, since we have access to a computer, it may be that we can write functions governing a particular interaction that do not have neat analytical forms (let alone whether or not their derivatives have neat analytical forms), so we might have a mess of piecewise functions needed to approximate them if we were to go about still trying to produce a Jacobian...

Things get even worse if my problem involves not just one amoeba, but multiple amoebae (which is when things ARE interesting), with new interaction rules enforcing that amoebae cannot violate each others' areas, and so on.

All the toy examples I see of PETSc time stepping problems have Jacobians defined, so I wonder if I would even get a speed gain going from switching to it, if perhaps one of the reasons why I have a high computational cost is due to not being able to provide a Jacobian function?

Browse other questions tagged python petsc time-integration scipy or ask your own question.

10
What is a robust, iterative solver for large 3-d linear-elastic problems?
5
Numerical instability of spherical pendulum
17
When is Newton-Krylov not an appropriate solver?
1
scipy.integrate.odeint: how can odeint access a parameter set that is evolving independently of it?
9
Matrix Balancing Algorithm
3
Which SciPy nonlinear solver when Jacobian is analytically known and sparse?
4
I wrote a 2D Finite Element program for Axial Loaded Plates, but the results are unexpected