I am running molecular dynamics simulations of water for testing purposes. The box is quite small, if you ask a guy running classical MD, and relatively large, if you ask a DFT guy: I have 58 water molecules in periodic boundary conditions.

To save CPU time, I am optimizing my cell with a classical force field before running the ab initio MD. I equilibrate the system classically at 300K for 1 ns, then take the last snapshot and use it as input for ab initio MD. My ab initio MD is regular DFT-based Born-Oppenheimer MD with a plane wave basis set and PAW (pseudo)potentials (VASP is the code). In both classical and ab initio simulations I am keeping the temperature constant at 300K using a velocity-rescaling thermostat.

I am surveying two different ways to make the transition between classical and ab initio:

I was hoping that both strategies would lead to the same average energy after a short (say 10 ps) equilibration period, especially considering that the starting configuration is exactly the same (same initial positions) except for the mentioned temperature trick (initial velocities differ). This is not the case. The figure below shows that the simulation where the system is frozen and then quickly heated up finds an energy region about 1 eV lower in energy than the other one, where the velocities where imported from classical MD. 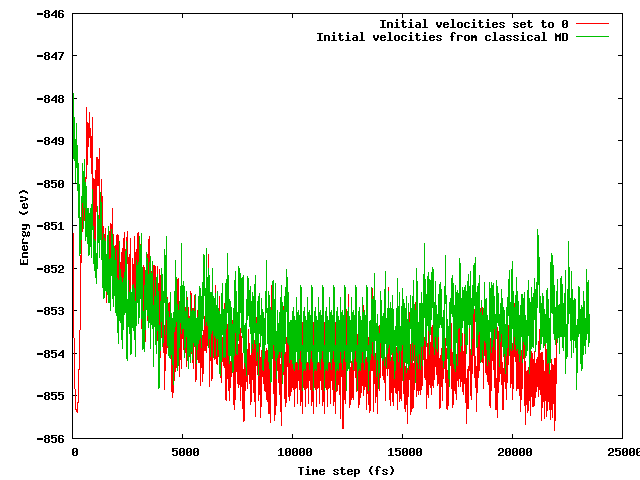 I have been running some more tests and -with the limited data I have at the moment- it seems that this might be a system-specific problem. A test with methanol instead of water in a box of the same size showed that the two different initial velocity schemes quickly converge to the same average energy. However, the classical configuration was very close to the quantum one in the case of methanol, that is, the energy at t = 0 was very close to the average energy after convergence. Water is a notoriously difficult system, so perhaps this problem is more or less water-specific. If no answers are added I will try and post one based on my results once I'm done with all the testing.

Not the answer you're looking for? Browse other questions tagged molecular-dynamics density-functional-theory or ask your own question.

5
Discretization of Classical Density Functional Theory (CDFT) problems
15
What are the advantages and disadvantages of the particle decomposition and domain decomposition parallelization algorithms?
3
What is the difference in accuracy between fully QM atomic simulations vs QM + classical?
4
Difficulty with possibly the simplest MD simulation
0
Non-deterministic/probabilistic molecular dynamics simulations
7
energy drift in molecular dynamics
2
CPU for ab-initio DFT calculations