Newton-based methods in optimization vs. solving systems of nonlinear equations

I asked for clarification about a recent question about minpack, and got the following comment:

What confuses me about this comment (and related negative opinions about specialized nonlinear least squares solvers like minpack) might be best explained on the example of the conjugate gradient method. This method is applicable to systems $Ax=b$ with a symmetric positive definite matrix $A$. It could also be used to solve the general least square problem $\operatorname{min}_x||Ax-b||^2$ for an arbitrary matrix $A$, but doing so is not recommended. One explanation why we shouldn't do this is that the condition number of the system would increase significantly.

But if turning a systems of equations into an optimization problem is considered problematic even for the linear case, why should it be less problematic for the general case? It seems to be somehow related to using a state of the art optimization algorithm, instead of using a slightly aged nonlinear least squares solver. But aren't the problems related to throwing away information and increasing the condition number of the system relatively independent of the actually used optimization algorithm?

Since one of my answers has been cited, I'll try to clarify why I suggested using IPOPT instead of MINPACK.

My objections to using MINPACK have nothing to do with the algorithms that MINPACK uses and everything to do with their implementation. My main objection is that the software dates back to 1980, and was last updated in 1999. Jorge Moré is retired; I doubt he or any of the other authors of the software keep tabs on it anymore, and there's no team of people actively supporting it. The only documentation I can find on the software is the original, 1980 Argonne technical report written by Jorge Moré and the other MINPACK authors. (Chapters 1-3 can be found here, and Chapter 4 can be found here.) After searching the MINPACK source code and perusing the documentation (the PDFs are scanned images, and can't be searched), I don't see any options to accommodate constraints. Since the original poster of the nonlinear least-squares problem wanted to solve a constrained nonlinear least-squares problem, MINPACK won't even solve that problem.

However, you make a good point that NLS algorithms should be investigated. I agree. I just think that a package more modern than MINPACK should be used because I believe it will perform better, be more usable, and be supported. Ceres seems like an interesting candidate package, but it can't handle constrained problems right now. TAO would work on box-constrained least-squares problems, although it doesn't implement the classic Levenberg-Marquardt, but instead implements a derivative-free algorithm. A derivative-free algorithm would probably work well for large-scale problems, but I wouldn't use it for small-scale problems. I couldn't find any other packages that inspired a great deal of confidence in their software engineering. For instance, GALAHAD doesn't seem to use version control or any automated testing, at first glance. MINPACK doesn't seem to do those things either. If you have experience with MINPACK or recommendations regarding better software, I'm all ears.

With all of that in mind, getting back to the quote of my comment:

A better comment is probably something to the effect of:

When we want to solve a system of $n$ equations with $n$ unknowns $g(x) = 0$, we can formulate this as a least squares optimization problem. (Paraphrase of last paragraph of p.102 of Nonlinear Programming, 2nd edition, by Dmitri Bertsekas.)

If a given nonlinear system is the first order optimality condition for an optimization problem, then we can often produce a more robust algorithm by using that information. For example, consider the equation 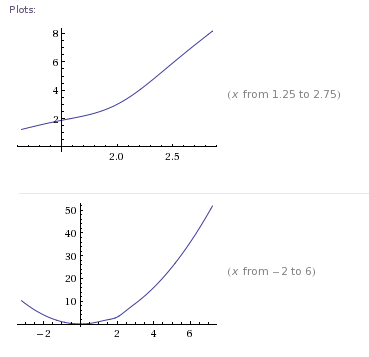 This clearly has a unique minimum and we expect our optimization method to find it regardless of starting point. But if we only look at the first order optimality conditions, we are looking for a solution $x$ of $\nabla f(x) = 0$ [Wolfram Alpha] 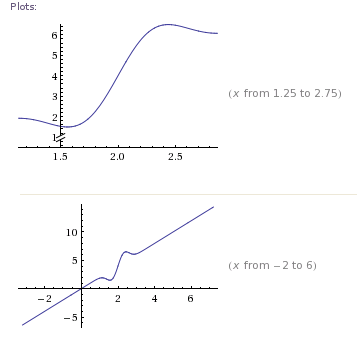 which has a unique solution, but many rootfinding methods can get stuck at the local minimum.

If we reformulate a new optimization problem to minimize the norm of the gradient squared, we are looking for a global minimum $x$ of $\lVert\nabla f(x)\rVert^2$ [Wolfram Alpha] which has multiple local minima. 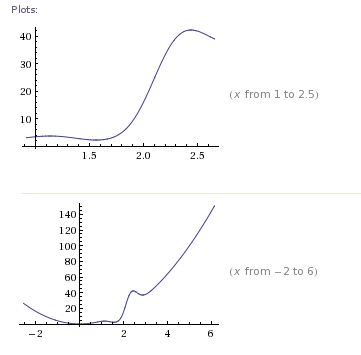 In general, each time we convert a problem from optimization to rootfinding or vice-versa, we make the available methods and associated convergence guarantees weaker. The actual mechanics of the methods are often very similar so it is possible to reuse a lot of code between nonlinear solvers and optimization.

Not the answer you're looking for? Browse other questions tagged optimization least-squares or ask your own question.

10
Nonlinear least squares with box constraints
9
Basin of attraction for Newton's method
6
The speed and memory requirement of minpack
8
F(x) = 0 vs. ||F(x)||^2->min