I am calculating $s$ by using Newton's Method and everything works fine for scenarios without thrust. The orbit is elliptical and closed, parabolic for higher initial velocities, if I choose a $\vec{r}_0$, $\vec{v}_0$ and $t_0$ and propagate $t$ forward.

it is necessary to update $\vec{r}_0$ and $\vec{v}_0$ every time, propagate $\Delta t$ forward and repeat instead of choosing initial conditions and just propagating $t$ forward. In preparation for that I chose not to add any velocity so both approaches should yield the same results.

Here is my Problem: Even after the first iteration the differences are large and the error increases fast 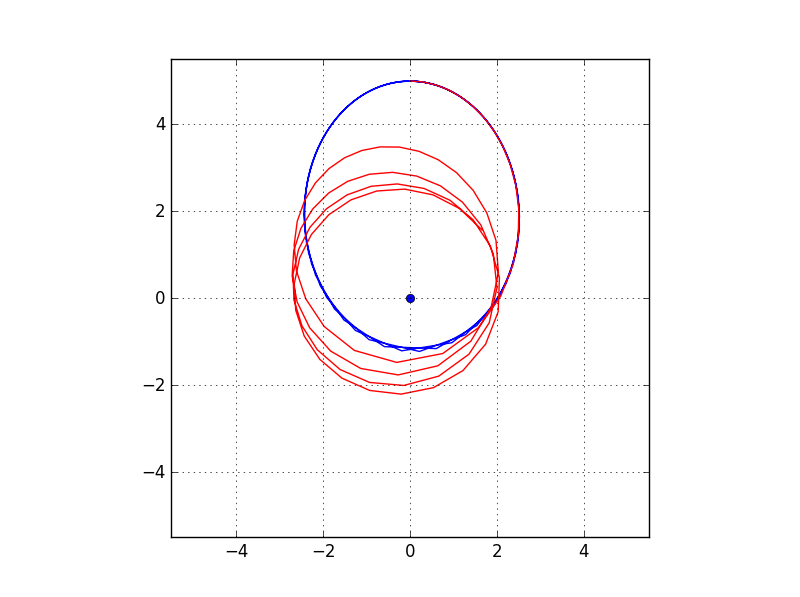 I thought I could solve this by using a more advanced integration algorithm like Runge-Kutta and tried to calculate every iteration in as few steps as possible but I was not able to transform the equations so that I could use Runge-Kutta (since it is not an ODE) and reducing the steps did not help at all.

Can someone help to fix this or give any hints to why this error is so large? Thank you in advance!

P.S.: I already ask this question on the physics stack exchange and they advised me to ask it here.

Browse other questions tagged computational-physics iterative-method or ask your own question.