0 Hz (quite sharp) peak in FFT and division by 0

In a previous question, link, I asked about how I could most effectively do a Fourier Transform of a radial function given at certain values and which we knew the asymptotical behaviour of. The Fourier transform reading $$\frac{4\pi}{q}\int^{\infty}_0 dr\, r \sin(qr) f(r).$$ I tried several ways and ended up choosing FFT, which approximates it by calculating the DFT over the interval $[0,\Delta r]$ with $N$ points. (I used more particularly the NAG subroutine C06FAF)

I still get some issue around $q=0$. Indeed, as can be seen on the figure 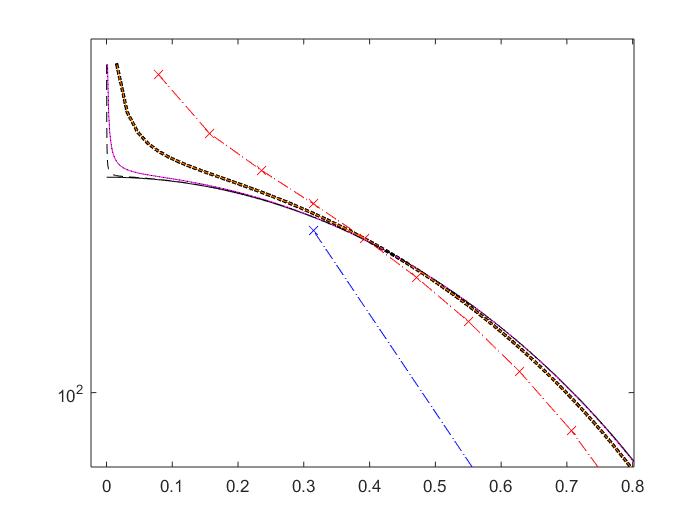 , I have some weird peak at very low frequencies. The black curve that is flat in q=0 is the analytical result while other curves are FFT calculations with increasing $\Delta r$. ($\color{blue}{\Delta r} >\color{red}{\Delta r} > {\bf \color{black}{\Delta r}} > \color{magenta}{\Delta r} $ and the dashed one being the highest $\Delta r$). As can be seen, this peak is narrower when $\Delta r$ gets larger.

The question is from where this peak does come ? And how could I get rid of it ? I already tried to take the mean of the function and substract it to the function but it does not change anything.

One subsidiary question is also the following : the subroutine calculates the integral. I then have to divide by $q$ to get this $4\pi/q$ factor. Though, at $q=0$, this can't be done for obvious reasons. So, what can be done instead ?

EDIT : the problem of the wide peak was simply due to the fact that I was doing a bad conversion between $q$ and the frequency from the routine. As far as the problem of the division by $q=0$ is concerned, I'm happy with Endulum's answer.

I would need additional information about your attempt (e.g., example code) to help with your first question, but here's my input for the division-by-zero question.

First, do you really need to divide by $q$? In the problems where these transforms come up, you can often get away with working with $rf(r)$ and $q\hat{f}(q)$ in their own right. Decide if you can put off dividing by $q$ until later on in the problem.

Not the answer you're looking for? Browse other questions tagged fortran fourier-analysis fourier-transform or ask your own question.

8
Quick and simple discrete 2D Helmholtz-Hodge Decomposition using FFTs?
4
Computing Fourier representation of space dependent advection operator via FFT
2
Numerically computing the advection equation
2
Convolution of two real functions using discrete Fourier transform (FFT): zero-padding and normalization
4
How to calculate efficiently and accurately the Fourier transform of a radial function in Fortran
3
Fourier transform by FFT : by using cubic splines to interpolate between data points, do we change the frequency content of the Fourier transform?
3
DFT of $g(\omega) \exp(i C \omega^2)$. How to do it ,if uniform sampling requires too much memory?
0
Specifying mesh spacing for DFT in numpy