Essentially I have a large voxel grid where each voxel contains the signed distance to an implicit surface. The surface can be extracted form the Voxel Grid using a marching cubes algorithm to generate a mesh. The vertices of this generated mesh lie on the edges of the cubes formed by joining the central points of 8 adjacent voxels.

Now the volume that I'm reconstructing is moving in a non-rigid way. I am able to track the motion of points on the surface of the object. In this way I can determine how a particular point on the mesh moved between one frame and another. I want to use this information to generate the effective transformation (translation) of each voxel in the voxel grid which would lead to the deformation of the implicit mesh which most closely matches the observed scene.

I have the situation described below: 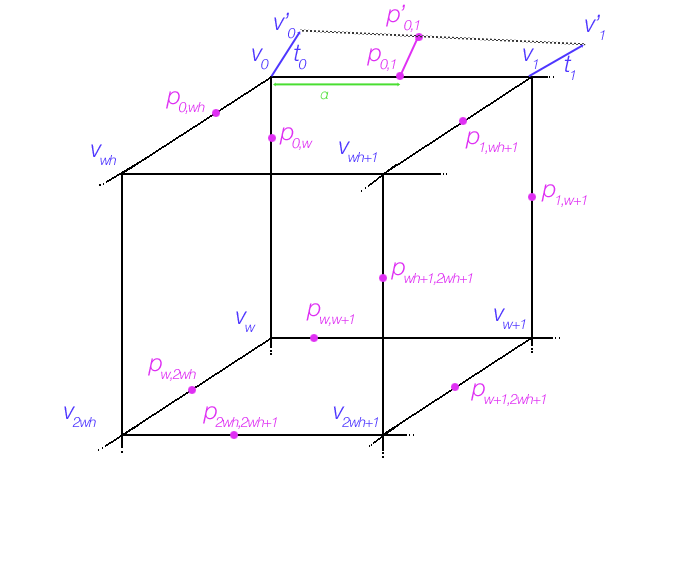 Other than at the boundaries of the grid, each $v_x$ is connected to 6 neighbouring points:

For each defined point, we can define $\alpha$ (green in the image), which is the proportion of the way along the edge from the first vertex to the second. So for example, $p_{0,1}$ has $\alpha$ equal to

The grid as shown represents the situation at time 0.

At time 1, I require each of the each of the points $p_{a,b}$ to be in a new location, $p'_{a,b}$ (known) which requires each of these points to undergo a translation. The overall transformation of the point cloud is not rigid, i.e. each point will be translated by a different amount.

I can only translate the points $p_{a,b}$ by moving the vertices $v_x$. When I do this, the distances between neighbouring vertices can change arbitrarily however the values of $\alpha$ computed after remain constant, i.e. the point $p_{a,b}$ still divides the edge $v_{a} v_{b}$ in the ratio $\alpha:(1 - \alpha)$.

What I think is true

I need to construct an energy equation comprising a data term and a regularisation term and then minimise this equation.

The sum is across all edges and so each $v'_a$ and $v' _b$ may be involved in multiple terms.

Where $N(i)$ is the neighbourhood of i and comprises all of the adjacent vertices.

Note that there are more regularisation terms ($m$) than there are data terms (because there’s not one $p$ per $v$).

I’m thinking of using non-linear least squares to solve this. I’ve written code which does this for a simpler problem in MATLAB and it works fine. The simpler problem uses :

Now I want to build my own code which can solve this for the full scale problem in 3D but I have some concerns:

Can anyone point me at appropriate literature or suggest a good starting point for research ?

I don't know much about tracking implicit surfaces, so I'm just going to start with the optimization problem and go from there.

The optimization problem is, at the core, nonlinear least squares, and can therefore be solved efficiently by the Gauss-Newton method, wherein at each step one linearizes the problem at the current guess, solves the linear least squares problem for this linearization, then uses the solution as the initial guess for the next step.

At each step, the linear least squares problem can be recast as solving one large sparse linear system. Figuring out what the coefficient matrix is for this linear system is a little mindbending, but doable with some matrix vectorization tricks (explanation below).

Once the matrix is constructed, the linear system can be solved efficiently with any good sparse-direct factorization technique up to quite large problem sizes. Furthermore, this matrix is physically analogous to the matrices that arise when trying to find the minimum energy configuration of a spring network, and so if the problem is extremely huge (too big for a sparse-direct factorization to fit in memory) it should still be amenable to multigrid.

If I read everything correctly, the optimization problem can be recast as:

A side note of interest is that the graph Laplacian $D^TD$ appears within the core of the $R^TR$, so this regularization could be interpreted as some form of grouped discrete smoothing regularization.

Above we glossed over the construction of the "heads" and "tails" selection matrices $E_\text{heads}$ and $E_\text{tails}$, so more details are provided here.

Not the answer you're looking for? Browse other questions tagged optimization nonlinear-equations newton-method cuda or ask your own question.