I am solving a first-order ODE:

This is the evolution of the plasma density in the presence of a laser pulse (complex amplitude A, which is normalized). The coefficients a, b and c depend on the material and the initial laser intensity. Typically, these coefficients are very large (for example a = 1e13, b=2e16 c=1e7).

Now I solve this equation (in Python, and I also played with C) with the conventional Runge-Kutta 4th order method (also tried 6th order); here is a little bit of code (quite standard, nothing fancy):

I also loop over space (Nr) because I have a time and space dependent plasma density. Since I discretized my time axis (with a total of Nt points, dT is usually 1e-16s), I do not use adaptive step size control (besides, I want this code to be fast).

Now, if I do this integration with low power, everything works fine, and I get a nice result (image showing the temporal evolution of plasma density $\rho$ for low power, at one space point): 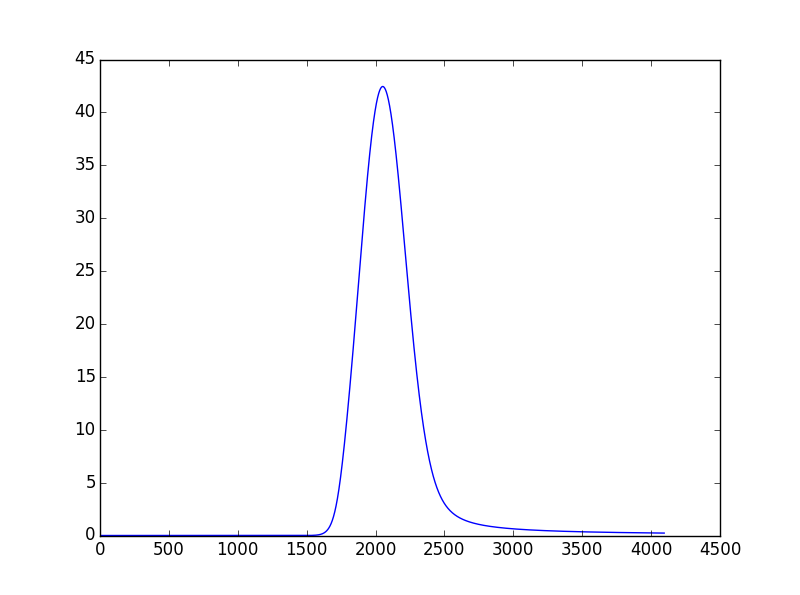 My question is: Do you have an idea how I can still get a result, without using step size control or using a finer grid? I wouldn't mind using approximations. I am really thankful for any help:)

Though the following will not necessarily solve your problem, it is highly recommended to implement the ode dimensionless such that all relevant quantities are around 1 to stabilize solvers. The result is to be scaled back accordingly. This will also give you a hint what goes wrong in terms of the size of the coefficients or step size in the discretization.

This way, when your expected plasma density increases because of larger laser powers, you pick larger $\rho_0$ and scale down $\hat{a}, \hat{b}, \hat{c}$.

In case of the limit $c\rightarrow 0$, you can even find a analytical solution for verification of your solver.

Here $C_1$ is the integration constant.

Not the answer you're looking for? Browse other questions tagged ode runge-kutta numerical-modelling or ask your own question.