Is the marching triangles algorithm guaranteed to terminate?

Is the marching triangles algorithm guaranteed to terminate (sucessfully)?

The algorithm does roughly speaking:

Now i get the following case 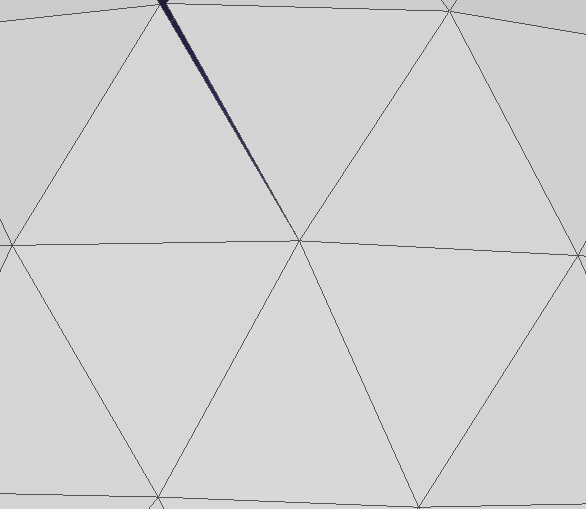 The algorithm correctly generated a mesh with triangles, by projecting the new points. Now there is a triangular crack, which is not local delaunay.

The example is a simple implicit circle function as used in the paper, the seed triangle is an arbitrary edge on the implicit function connected with a point projected by the fixed distance and then projected back on the surface as defined in the algorithm.

Despite the obvious problem with my implementation, i do not see if the algorithm as described in the paper is guaranteed to always find a admissible triangle in an iteration until the edge list is empty.

According to the following paper, the algorithm creates cracks like you have (see figure 1 and surrounding discussion).

This paper claims that their new algorithm is able to "reduce the cracks in the final resulting mesh".

Not the answer you're looking for? Browse other questions tagged delaunay-triangulation or ask your own question.

9
How are the Voronoi Tesselation and Delaunay triangulation problems duals of each other?
8
Proper data-structure and algorithm for 3-D Delaunay triangulation
3
Best incremental multidimensional Delaunay tessellation algorithm
28
What is the preferred and efficient approach for interpolating multidimensional data?
4
How can one prove the duality of Voronoi and Delaunay?
3
Is the similar subdivision of a delaunay mesh still delaunay?