Given a uniform polar grid, as in the figure below: 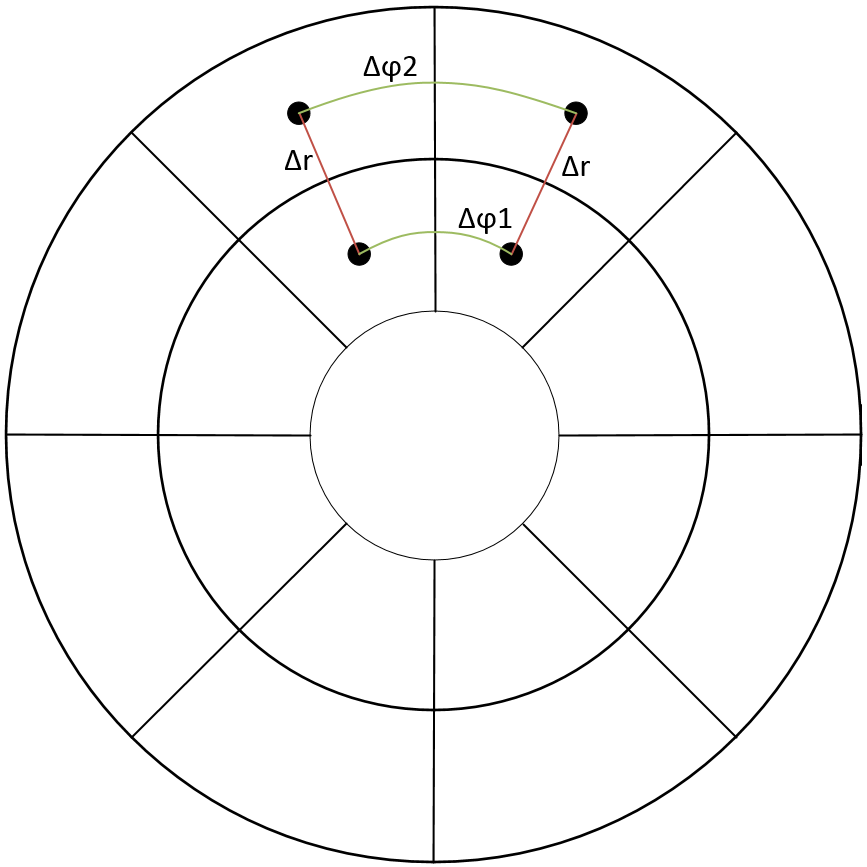 and a FV discretization of a gradient for example:

My Question revolves around the value of $\Delta \varphi$

From an arc point of view, the length between two cells will change for different radii.

Which one is correct? Textbooks rarely concern themselves with anything other than Cartesian grids or jump directly into more complex ones.

The actual PDE is more complicated. I compared the results of the simulation against the exact solution for a constant $\Delta\varphi$, but which only exists for a simplified problem. They match pretty well.

As I was moving onto more complex situations, I was starting to doubt that assumption and before jumping into the code, I would like to clarify the situation.

Your cells are not infinitesimally small so it will be a bit more complicated than either formulation you have there. (The ``width'' of your finite volume cell varies nontrivially over the cell, so we cannot just approximate it as $\Delta s \Delta r$.)

In the last line, I have tried to express the integral result in the notation you used, but I'm not exactly sure if that's what you intended with your notation. Note that the function $p$ must be weighted by $r$ before integrating over the east and west borders of your finite volume cell.

If $p$ is constant with respect to $r$, the previous result simplifies to

Multiplying it by $\Delta r$ and $\Delta \varphi$ is unnecessary/arbitrary unless you have other terms in your differential equation. When you do have other terms, I recommend you do the integration as I have done to see what the coefficients are.

Not the answer you're looking for? Browse other questions tagged finite-volume discretization grid or ask your own question.