So I have been working on a Smooth Particle Hydrodynamics (SPH) simulation and I am trying to implement the Marching Cubes (MC) algorithm to visualize my SPH output. I understand the MC algorithm well enough from reading about it, however usually it is discussed assuming that you already have some scalar field which you can than use to classify your voxels as being either above, below, or on the boundary surface you are trying to create (in my case this amounts to checking if the voxel is above, below, or on the fluid surface). The key part here is that it is easy to check the value of the scalar field at any cube vertex.

However, with my SPH output data I don't have some nice scalar field to use. Instead I have a lot of particles distributed (randomly or haphazardly) in my domain. I know each particles density at these random points, but I don't know the density at the MC grid vertices. For example consider the simple 2d example: 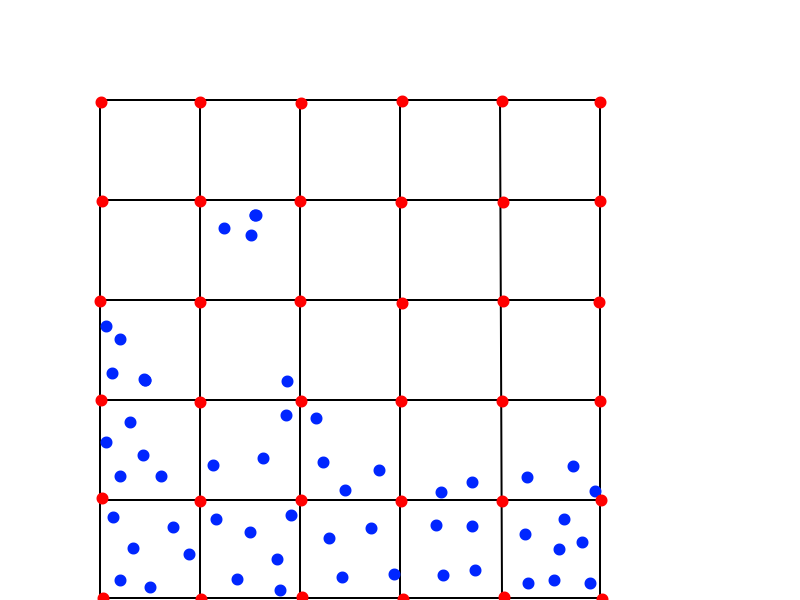 Each of the blue points represent a particle. After performing my SPH solve, I know the position, velocity, and density of each particle at these points. Now, in order to classify each voxel as being above, below, or on the fluid surface I need to know the density at the voxel vertices (i.e. the red points). How is this typically done given you know the density at the blue particles?

My initial thought was to calculate the density at the red points in the same way as is done in the SPH simulation. In this case I would use:

at each voxel vertex point where $W=0$ when $r > h$. In the picture below this means the green particles would be used in calculating the voxel vertex density value: 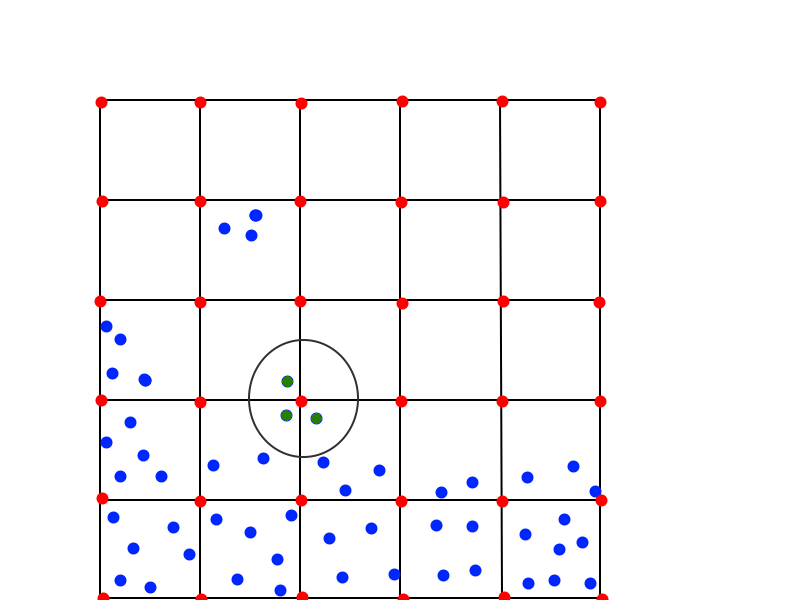 Now my concerns/doubts with this approach are as follows:

So my questions are as follows:

Note: As mentioned in the title I am using CUDA so keep that in mind.

Not the answer you're looking for? Browse other questions tagged cuda sph or ask your own question.

5
Mapping SPH data on Eulerian Grid for further evolution
6
How to get proper parameters of SPH simulation?
0
How can I use Scipy to fit data generated from a C++ model?
2
using GPUs before CUDA and OpenCL
4
Efficient Successive Over Relaxation using Cuda?
1
How to make objective elastic SPH model?
6
What would be a good approach to solving this large data non-linear least squares optimisation