I am working on mesh generation and optimization and encountered this problem. For example, in the figure below, we have the edge-vertex connectivity: 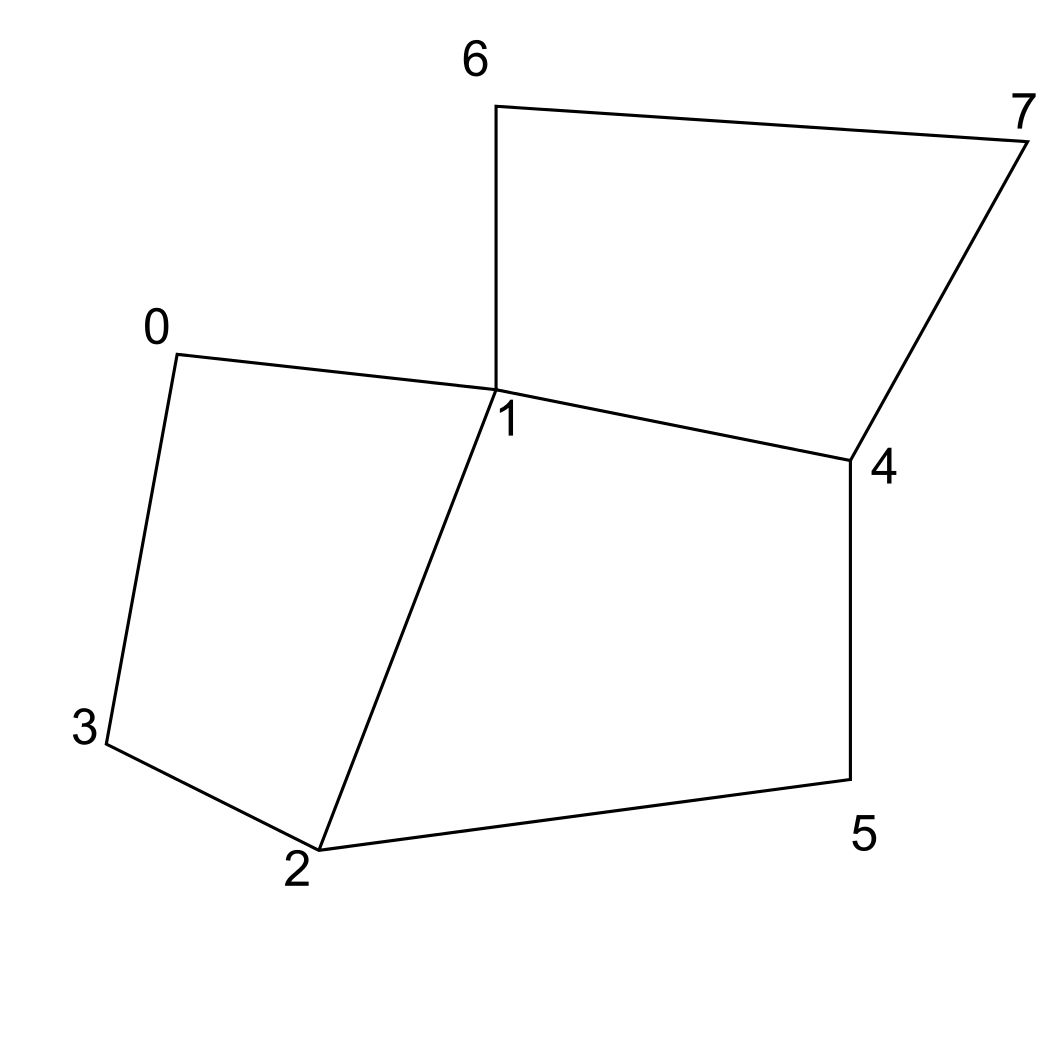 As noted in the comments, your problem doesn't seem quite solvable as stated. However, if you include the assumption that each node has a 2D coordinate associated with it, then it is solvable. With the coordinates, the embedding has been chosen for you, so you don't have to worry about uniqueness.

The first thing to do is to name each edge and build the node-edge adjacency list:

Note that I made no distinction about inbound vs outbound edges. You'll have to take care of this at some point, but you can decide where to do your bookkeeping.

Next, set up two arrays of booleans. The first array, $F$, indicates whether an edge has been touched in the "forward" direction (ie, in the direction listed above, like $0 \rightarrow 1$). A similar array, $B$, keeps track of the edges that you've used in the reverse direction.

Now the part that actually does some work: Pick an edge and do a depth-first search. When picking the next edge to visit, be sure to turn "left". (Pick the next edge in the clockwise adjacency list for the node that you're arriving at.) Mark each edge as "visited" in the direction that you are travelling. Once you encounter an edge that you have already used, pop everything off of your stack, and you have your cell.

Here is a worked example starting at edge $g$.

Note, this algorithm will terminate after every edge has been visited precisely once in each direction. This means that your "boundary" edges will all be linked together in a single "face", but this face will have all of its edges pointing with clockwise circulation, while the interior faces will have counterclockwise circulation. This can be useful for identifying which edges make up the boundary of your domain.

Not the answer you're looking for? Browse other questions tagged finite-element computational-geometry mesh-generation or ask your own question.

5
A simple function for generating a nonuniform mesh in 1D with fixed minimum spacing
5
Meshing options to generate number of the sides of and element (tetgen-triangle)
2
Integrate over a face of a bubble function
2
Two-dimensional mesh in fem: generating P1, P2, P3,… mesh from a P1 mesh
0
Meshing software: connectivity between elements and boundary
1
How to generate a face list from vertices?
1
stretch elliptic mesh to fit a circle
2
Mesh partition quality