Ordering of elements in an unstructured mesh is undoubtedly very important for the performance of computations. For example, it determines the structure of sparse matrices arising from PDE discretizations, which affects the performance of most linear algebra operations like matrix-vector product.

Recently we used an unstructured tetrahedral mesh generated by COMSOL Multiphysics. For given mesh, we construct a matrix with the following structure: each row corresponds to some facet $F$ of the mesh and the non-zero elements correspond to the facets of the one or two cells adjacent to the facet $F$, i.e. for tetrahedral mesh each row has at most 7 non-zero elements. The matrix structure for the mesh generated by COMSOL is shown on the following figure. 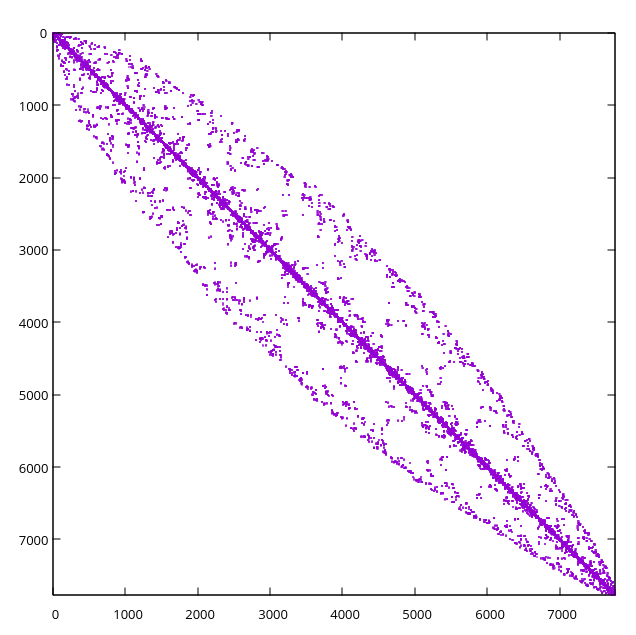 Simultaneously, we experiment with other mesh generators, but we currently don't have a good way to order the mesh. Using a simple approach of an in-order traversal of an octree of the cell centers, we get the following structure of the same matrix as above, which is not as "nice" as the original: 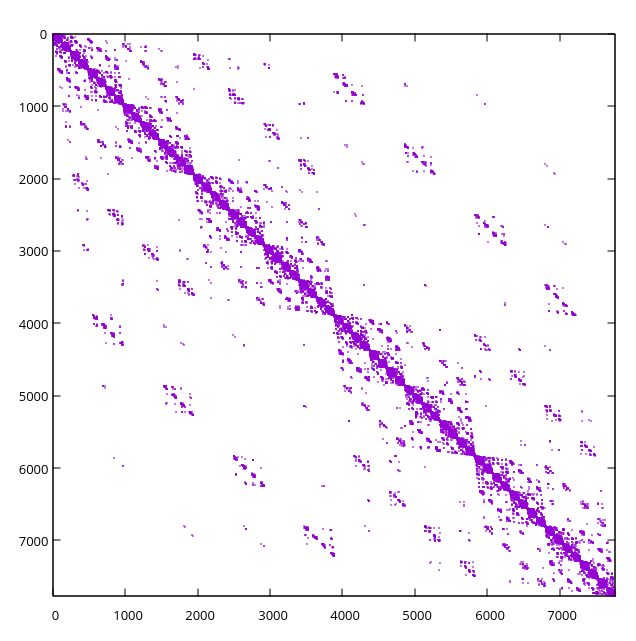 Unfortunately the COMSOL documentation does not say anything about mesh ordering algorithms. Does anybody have an idea which algorithm it might be using or which algorithms might generate similar (or better) structure?

The idea of "ordering the nodes" in a finite element mesh to improve the computational time of the sparse solver originated in the large structural analysis FE codes of the 70's. Those codes typically used banded or variable-band storage schemes for the sparse matrices so reducing the bandwidth was the main criterion. That is the origin of the old Cuthill-McKee and Reverse-Cuthill-McKee bandwidth reduction algorithms.

Those concepts are essentially obsolete today in all FE codes, such as COMSOL, that use modern sparse solvers.

You say that your second ordering is "not as nice" as your first, presumably because the bandwidth is larger than the first. Bandwidth is a completely irrelevant metric in all modern sparse solvers.

Here is a specific example that you may find surprising. In a classic paper from 1973, nested dissection, Alan George showed that the optimum numbering for the Laplace equation discretized with a simple square finite element mesh was obtained by what he called "nested dissection." The non-zeros for a $7\times7$ mesh with equations ordered according to the nested dissection algorithm are shown in the figure below. 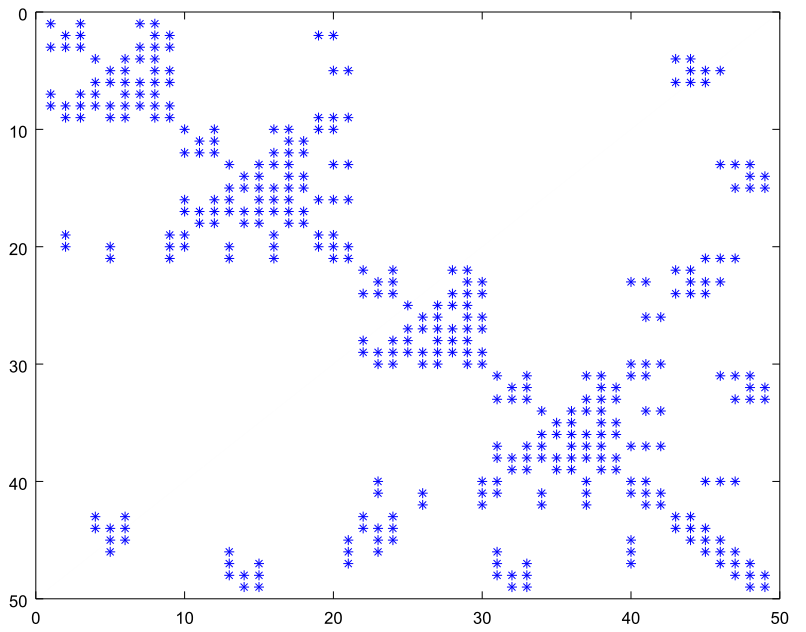 As you can see, the bandwidth of the matrix is nearly equal to the number of equations. This is the equation ordering that minimizes the number of floating point operations during factorization.

All modern sparse solvers that I am aware of include algorithms for reordering the equations for computational efficiency and they are invoked by default. Many include multiple algorithms and will try two or more to find the one which minimizes the factorization time.

The latest COMSOL documentation I have found shows that the direct sparse solver options are MUMPS, PARDISO, and SPOOLES. All three of these have excellent algorithms for reordering equations. They include algorithms that attempt to find an ordering similar to George's nested dissection on general meshes.

For your specific problem, it is worthwhile to review COMSOL's guidelines regarding choice of direct solver. And you might want to try one of the iterative solver options where the equation ordering is irrelevant. But, in either case, the numbers you use to label the nodes in your mesh are not going to have any significant effect on the computational time. So pick ones that are most convenient for you.

Based on the comment by @TylerOlsen, I've applied the boost implementation of the reverse Cuthill-McKee ordering on the same matrix from the original question and here is the result: 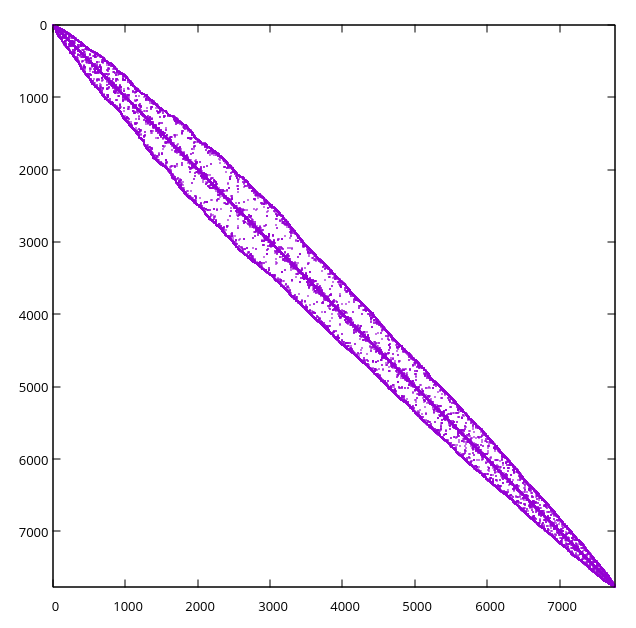 The structure looks very similar, but the bandwidth is significantly smaller compared to the original matrix with COMSOL ordering. Also changing the starting vertex in the Cuthill-McKee algorithm (e.g. enforcing to use the same starting vertex as COMSOL) does not have a significant effect on the bandwidth for this particular mesh. I consider this to be even better result.

Since I can't formally accept comments, I'm going to self-accept this answer, but of course the credit goes to @TylerOlsen.