Suppose that I have a large (on the order of 10^6 unknowns) 3D scalar Poisson system which I would like to precondition. The boundary conditions have been treated so that the system is SPD. I.e.,

the matrices tend to have the following structure (this is a very small problem, the larger problems are indeed sparse): 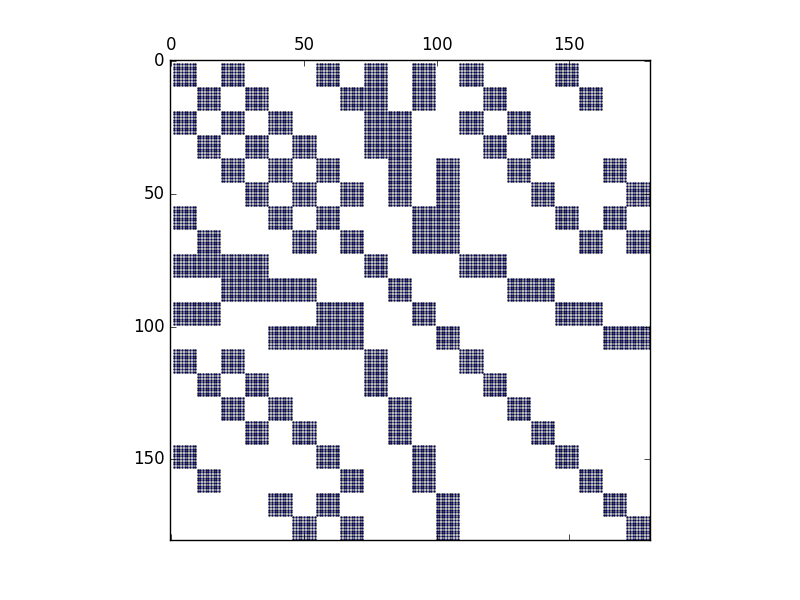 Is there a consensus about how to precondition such systems (ideally in a way that can be implemented in parallel)?

The linear system is SPD, so it seems natural to choose a PCG scheme, but I haven't been able to find a consensus about how to choose the preconditioner, since many papers deal with more complicated Stokes-like systems instead.

Preconditioning and iterative solvers are cool, but did you try to solve your problem with some kind of sparse direct solver? If not, try it first.

State–of–the–art preconditioning techniques for this kind of problems are multigrid techniques. In many cases multigrid allows you to solve your (elliptic) problem in $O(n)$ time.

With SPD matrix, call it $A$, PCG is a good method.

The kind of preconditioner depend a lot by the matrix structure (read kind of matrix) that you have got and there is not a unique answer.

The basic criteria to choose the preconditioner, $P$, are more than one. Considering the PCG the three most important are:

Diagonal $D^{-1}$ The diagonal preconditioner is very easy to implement and cheap to apply, but is not very efficient. The matrix contains the verse of $A$ diagonal terms. Better if it is used with matrix $A$ diagonally dominant, but when the extra diagonal terms are big you can find problem.

When you talk about parallel execution here is important to know the kind of hardware. Anyway you must parallelize the preconditioner application, for example with $D^{-1}$ you parallelize the $\frac{v_i}{d_i}$ operation for the whole vector.

Since you mentioned the Stokes's problem I add some rows about parallelition. If your goal is to use heavy parallelization as gpu is important to use preconditioner with an easy application for gpu, as the product matrix vector sparse (SpMV). In the article of Li and Saad [1] there is a comparison of various preconditioners for gpu.

In the case of gpu polynomial preconditioner is good. I personally use this kind with good performance respect other traditional gpu preconditioner, see this link to CUSP group where I give some detail, with reference, and also the code with some result test. This is a least square preconditioner, it uses Chebyshev polynomials so explicit quadrature formula are not involved, detail are in the article by J. Erhel, F. Guyomarc, and Y. Saad [2].

Not the answer you're looking for? Browse other questions tagged reference-request preconditioning or ask your own question.