Why is it not computationally possible to accurately predict the weather that would occur after 14 days?

As per wikipedia, scientists have not been successful to accurately predict the whether which is 2 weeks ahead. Here is the excerpt:

The atmosphere is a chaotic system, as a result, small changes to one part of the system can grow to have large effects on the system as a whole.This makes it difficult to accurately predict weather more than a few days in advance, though weather forecasters are continually working to extend this limit through the scientific study of weather, meteorology. It is theoretically impossible to make useful day-to-day predictions more than about two weeks ahead, imposing an upper limit to potential for improved prediction skill

Yes, weather (or the equations describing it) is extremely sensitive to the initial conditions. The fact that the weather system contains phenomena at pretty much all time and space scales (have a look at figures 1.1 and 1.2 of these notes for some examples) does not make predictions any easier. Also, the "weather" (at various scales) is dependent on a whole bunch of other planetary systems (oceans, land-based processes, etc.) that come in with their own model and observational uncertainties: 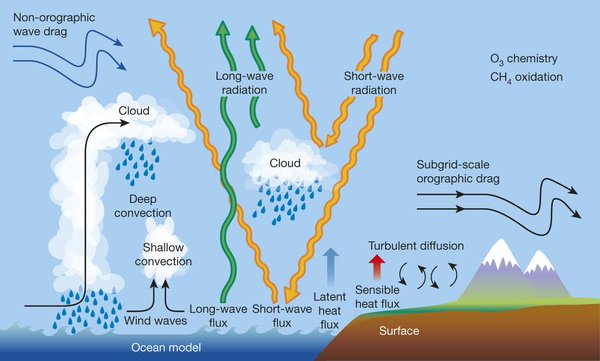 That said, significant progress has been made in the past few decades, and people in the operational weather forecasting community (at least the folks over at ECMWF, which are really at the top of their game when it comes to weather forecasting) refer to this graph that showcases these improvements: 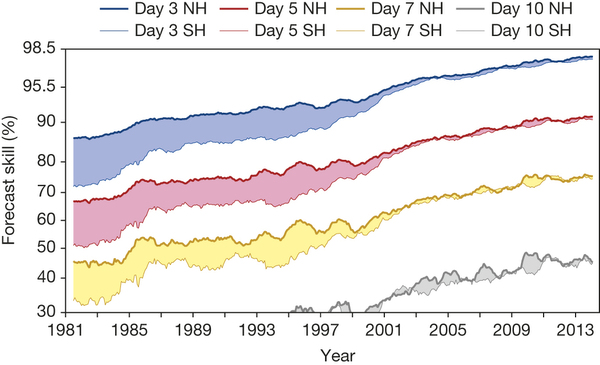 The figure above is from Bauer et al., Nature, 2015 and shows a measure of forecast skill at three-, five-, seven- and ten-day ranges, computed over the extra-tropical northern (NH) and southern hemispheres (their caption).

What the figure shows is that forecast skill has been steadily increasing for the past 3 decades, with some major "bumps" in performance brought in by

For example, the 10-day forecast quality is the same as that of a 7-day forecast made 30 years ago, so you can say we're up a day every 10 years :)

So I, for one, think that there is no hard physical barrier (boo, Lorenz!) that does not/will not allow us to predict the weather, say, 14 or 20 or 25 days in advance. It's just that we're lacking (1) sufficient knowledge of the weather system (2) computing power to simulate the weather at high-enough resolution (3) high-quality observational data to constrain existing 3D/4D-var and ensemble forecasting systems.

Errors grow exponentially in a chaotic system, and most people believe weather is chaotic. So even if you get a fairly exact numerical approximation, the fact that your input data (temperatures, etc.) and your model are slightly off from reality will cause results which exponentially diverge from reality as time goes on. Thus long time prediction of weather is extremely difficult!

Not the answer you're looking for? Browse other questions tagged computational-physics or ask your own question.

13
Why is leapfrog integration symplectic and RK4 not, if the latter is more accurate?