I am solving the Dirichlet problem $$ \begin{cases} \Delta u = 0, \\ u|_{\partial D} = f, \end{cases} $$ in a $2d$ domain $D$ using the finite element method. What I want to get is the normal derivative of the solution $u$ on the boundary: $\tfrac{\partial u}{\partial \nu}$. In other words, I'm interested in FEM implementation of the Dirichlet-to-Neumann (Poincare-Steklov) map $\Lambda$.

Hovewer, I could not find an explicit answer to this problem in Google. I'm programming in Matlab and I would extremely appreciate an optimized solution.

However, if I implement this approach, I get some nonsense. For example, consider the following circular domain and boundary values $u_0(x,y) = -y$ 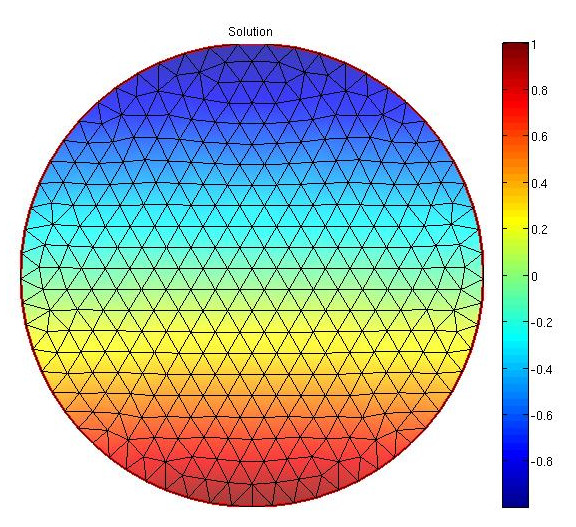 Then the flux along the boundary must coincide with $u_0(x,y)$

I am trying to compute the flux of with the equations used above. However I was wondering what functions to use for $h$? If I use piecewise constant on elements, I get that the $B$ matrix has rank 1 too small (because its a circle), but how can one know this beforehand? (I tried to adjoin this with that the total flux must be $0$ but it gives wrong results). If I try to use a continous at vertices and linear on elements function, I get a flux which misses a factor of $1.4$. If I try to use discontinous but linear elements the $B$ matrix has more columns then rows. For $w$ I used continous piecewise linear elements which are $1$ only at nodes on the boundary, is this right?

What is the precise elements to use for all the functions, and can someone write a pseudo code for this problem?

The formulation of this problem is tricky. Here is what you have in your original post:

Now, this means that on the left you have that the functions $h,w$ are from different spaces: you have "many more" test functions $w$ than solution functions $h$. If you discretized this, you'd get a rectangular matrix with more rows than columns.

Of course, in practice the "vast majority" of $H^1$ functions $w$ are in fact zero on the boundary. Indeed, the set of test functions $w\in H^1$ whose traces $w|_{\partial D}$ are linear independent (i.e.,for which the corresponding rows of the matrix on the left will be linearly independent) can all be written as the extension of $H^{1/2}(\partial D)$ functions into the interior. How exactly one extends into the interior does not actually matter; let us just say that $Ew \in H^1(D)$ is an extension of $w\in H^{1/2}(\partial D)$ so that $Ew|_{\partial D}=w$.

Finally, we had not chosen an extension operator. For practical reasons, it would of course be nice if $Ew_i$ is a finite element function, for example one in $W_h$ (or at least a polynomial on each cell) because then you can just apply quadrature as always. This is easily achieved by making sure that $Ew_i$ is zero at all interior nodes. If you do this, then $A_{ij}$ is zero for all $j$ corresponding to nodes that are neither at the boundary or on cells that are adjacent to the boundary. (This would suggest more efficient ways to store the matrix $A$, but that's besides the point for the current post.)

Not the answer you're looking for? Browse other questions tagged finite-element matlab boundary-conditions elliptic-pde or ask your own question.

26
What is the purpose of using integration by parts in deriving a weak form for FEM discretization?
7
FEM+DDM applied to scalar Helmholtz - necessity of lagrange multipliers?
1
How to correctly define the flux in a finite volume method for Poisson's equation with a piecewise constant material
1
An example of mixed elliptic problem using lowest-order Raviart Thomas element
0
Mixed formulation of the Poisson equation (FEM)
2
How to use Newton-Raphson method to handle nonlinear terms in coupled system of PDEs?
2
Finite element (1D) for steady state non-linear problem