Computing the Ising Model for NiO 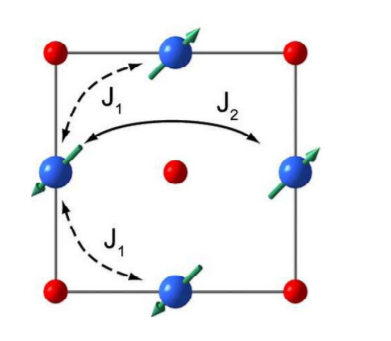 I have created some code that generates a matrix that alternates 1 and -1 (spin up/spin down) in every second entry and 0 for every other entry (representing oxygen). I have also defined functions that will flip the spin for every nearest neighbour and second nearest neighbour. As the dominating coupling constant J2 < 0, the system should be antiferromagnetic so the spins should align diagonally repeating the pattern (1,0,-1,0) e.g:

However when I run the code, I am not able to achieve that. I can reach a certain amount of order at low temperatures (T~2) but not total ferromagnetism as can be seen below. Going lower (e.g. T~0.01) will yield disorder: 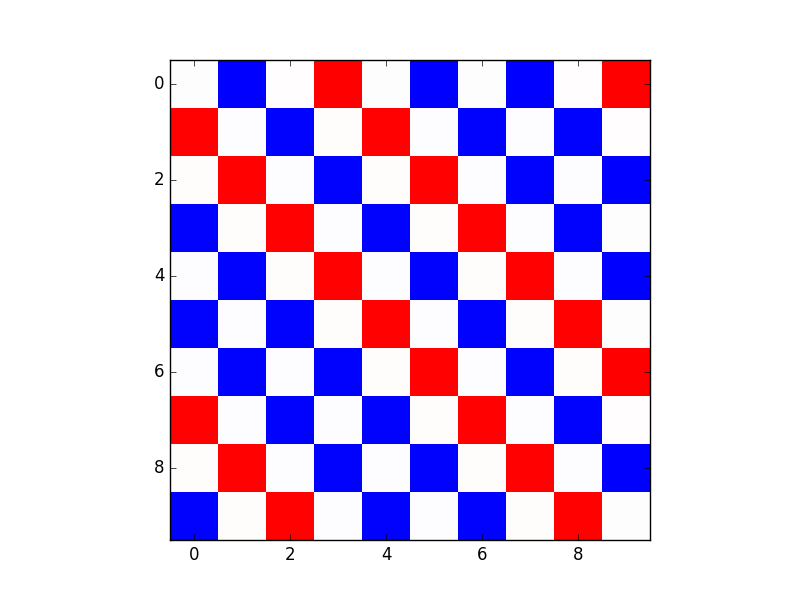 Here is my code:

Any help would be greatly appreciated.

Your Metropolis algorithm's loop is wrong as this is not a Metropolis procedure.

You're looping through all the spins, flipping them is the flip reduces the energy when you actually have to pick $x,y \in [0,N]$ randomly at each step and check if flipping is reducing the energy. If it does, you keep the flip, if it doesn't you keep it with the probability distribution you're using (i.e. keep if $\chi > 1/k_BT$ with $\chi$ uniformly distributed on $[0,1]$).

Note that this loop only return one matrix. If you want to compute any statistically interesting value, you have to compute regularly values like energy or mean orientation.

Edit : I tried to make your code work and beside this algorithm problem, a few other comments came to my mind. Here is my code with a few comments:

Global variable are rarely a good idea (in short code like that it's no big deal). Use conditions to use/define them like "if (main):". More importantly, when using physical units (here Ev and K), convert everything in the same set of units. $k_B$ has a dimension of energy per kelvin, use it. If you want to use dimensionless units, you have to compute $J1/k_BT$ and $J2/k_BT$ first.

I've made a function to compute the energy of a single configuration:

This is my version of your Metropolis algorithm:

I modified your algorithm in several ways. Your version was looping in the atoms in a deterministic way as I commented first. This one pick the atoms in a pseudo-random way which is the heart of the Metropolis algorithm. Also, you can use intermediate variables for condition in order to make the code easier to read. Writing lines like:

Quickly make things confusing. Python is not really designed for direct functional evaluation like this. (Also note that you got the signs wrong in your initial version.) You also used random.random() library which doesn't explicitly give you uniform distribution. random.uniform() is here for you.

Don't hesitate to stock intermediate variable in this kind of situation. If you pass a function like metropolis(...) as a variable of another function (say print) it will cause a new evaluation of the function. Again, python is not well suited for this kind of functional programming style (unless you're using generators with lazy evaluation).

A final comment on your expected behavior: MC-metropolis algorithm is random. You expected to observe the configuration at equilibrium but after 100 random flips (not all of them accepted), it is not said you'll converge to equilibrium. the shortest convergence I observed with my algorithm was around 250 flips but don't hesitate to set them to 10000. Such a simple code must be quite fast. Be aware though that the convergence will require more and more cycles as the system grows.

I have got the result to be in antiferromagnetic order. 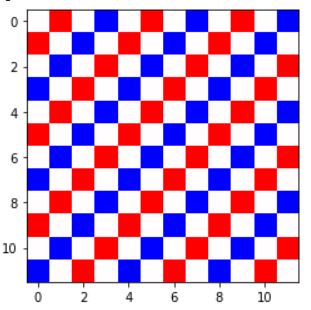 Not the answer you're looking for? Browse other questions tagged python monte-carlo or ask your own question.

6
3d Ising model simulation - what critical exponents should I be looking for and how do I find them?
1
Monte Carlo update based on sub-lattices
3
2D Ising Model in Python
1
2D Ising Model, heat capacity decreases with lattice size
2
Problem concerning a part of a simulation for the Ising Model
4
Absence of Discontinuity in Specific Heat Plot Simulated by Ising Model
2
Question regarding the energy computation of the Ising-Spin Model
3
Ising NiO model energy