I'm trying to analyse the behaviour of a wind turbine blade rigidly connected to a wall during fatigue testing, being excited in it's first mode in two orthogaonal directions simultaneously (the first 'up and down' and the first 'side to side' mode). I currently do this in two ways, both of which use a beam element model of the blade:

Both methods produce comparable natural frequencies and mode shapes, but the modal superposition fails to capture behaviour which is seen in real life. The plot below shows this. The red line is generated by modal superposition, the blue line is real test data (but is similar to what is obtained with the nonlinear transient analysis). If I do a linear transient analysis then the behaviour is as the red line - it seems like when the loading in the $M_X$ direction is in phase with the loading in the $M_Y$ direction, the modes create some extra loading (and the opposite thing happens) when the two modes are opposed to each other, which keeps the overall amount of energy in the system constant over time.

Does anybody know of any less computationally expensive methods than nonlinear transient which may be able to capture this behaviour? I don't want to create a fudge ideally - I'd like a physics based result! 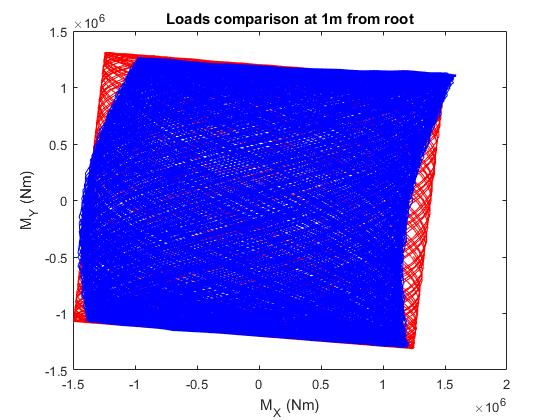 Any help will be very much appreciated!

Your numerical results for the transient response are as expected.

Options for you (I assume that you are using implicit scheme for non-linear transient response as you mentioned that you update stiffness and mass matrices.)

1.) Instead of an implicit time integration scheme, you can use an explicit scheme, for example, the well-known Central Difference scheme.

2.) As you are interested in the design optimisation, your best option would be to use nonlinear normal modes (NNM), which is an extension of linear modal analysis to non-linear regime.

I think that in NNM, instead of using the natural frequencies and mode shapes from the linear stiffness matrix, you use those corresponding to the nonlinear stiffness matrix. As non-linear static analysis, and modal analysis thereafter, is much less expensive than the full nonlinear transient analysis, NNM would be the best method for your task. I am not quite familiar with this NNM technique. I suggest you to refer to the relevant literature for comprehensive details on NNM.

Not the answer you're looking for? Browse other questions tagged finite-element nonlinear-equations eigensystem numerical-modelling or ask your own question.