I have a problem that I have been attempting to solve for a few days now. I was wondering if I would be able to get some assistance from the community.

Now my polygons (I use this term loosely) are composed of both arcs and line segments. These polygons are simple and do not loop back on themselves. The polygons can either be convex or concave. As a side note, arcs in my program are represented as circular arcs.

The winding number algorithm works perfectly for line segments. But when we get to arcs, things can be a little bit more complicated. My current implementation is to consider any point that is underneath the curve of the arc would be inside of the arc. (Note: Source code for the implementation of my algorithm is given at the end of the post)

This implementation mostly works but, from the picture below, the red dot would be given as a false positive. The winding number algorithm would indicate that the red dot is inside the polygon when it clearly is not. 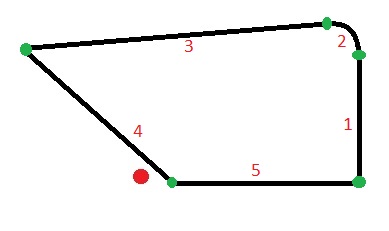 Now, the implementation with the arcs has another fault where the algorithm will return a false negative. Below is a picture of geometry where the point in the center would be outside of the polygon and the point off to the side is inside.

This polygon is composed of only arcs.

For a few days now, I have been considering different implementations but so far, nothing has panned out. Another thing about the arcs is that they are all in the CCW orientation. Whether the arc is concave/convex depends on which node is selected as the first node.

I am posting a link to the source file for the code in case you want to see a more complete solution. I am also posting snippets that are relevant to convince. If you have any questions regarding the code, please do not hesitate to ask. Thank you

Enclose each one of your arcs by a box that connects the two end points on one diagonal and choose the other two points to make things into a box. Then replace the original polygon-with-arcs $P$ by the polygon $P'$ that contains all of the straight line segments plus, say, the inside two sides of all of the boxes. (Or the outsides, or choose randomly.)

Then, given a point to test, you can first figure out whether the point is inside one of the boxes. If it is not, then if it is inside (outside) $P'$ (easily testable) then it must also be inside (outside) $P$. On the other hand, if the point is in one of the boxes that enclose the arcs, then you'll have to test whether it is on one side of the arc or the other -- but that's easy because an arc has such a simple structure.

Not the answer you're looking for? Browse other questions tagged computational-geometry mesh geometry modeling or ask your own question.