For noisy or fine-structured data, are there better quadratures than the midpoint rule?

Only the first two sections of this long question are essential. The others are just for illustration.

Advanced quadratures such as higher-degree composite Newton–Cotes, Gauß–Legendre, and Romberg seem to be mainly intended for cases where one can finely sample the function but not integrate analytically. However, for functions with structures finer than the sampling interval (see Appendix A for an example) or measurement noise, they cannot compete with simple approaches such as the midpoint or trapezoid rule (see Appendix B for a demonstration).

This is somewhat intuitive as, e.g., the composite Simpson rule essentially “discards” one quarter of the information by assigning it a lower weight. The only reason such quadratures are better for sufficiently boring functions is that properly handling border effects outweighs the effect of discarded information. From another point of view, it is intuitively clear to me that for functions with a fine structure or noise, samples that are remote from the borders of the integration domain must be almost equidistant and have almost the same weight (for a high number of samples). On the other hand, quadrature of such functions may benefit from a better handling of border effects (than for the midpoint method).

Assume that I wish to numerically integrate noisy or fine-structured one-dimensional data.

Appendix A: Specific example of a fine-structured function 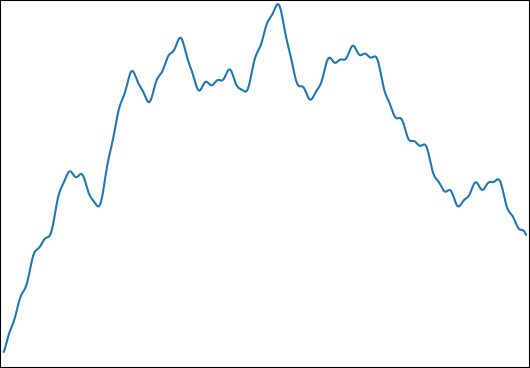 I chose this function for the following properties:

For completeness, here is a benchmark in Python:

(I here use the median to reduce the influence of outliers due to functions that have only high-frequency content. For the mean, the results are similar.)

The medians of the relative integration errors are:

Note: After two months and one bounty without result, I posted this on MathOverflow.

So what is the idea behind adaptive quadrature as implemented in QUADPACK for example?

So I challenge you to update your code above using the scipy.quad method. Maybe in case of an integrand with a lot of "fine structure" you might need to increase the maximum number of subdivisions (the limit option). You could also play with the epsabs and/or epsrel parameters.

However, if you only have experimental data, I see two possibilities.

I am not convinced that your code demonstrates anything fundamental about the various quadrature rules and how well they do against noise and fine structure, and believe it likely that if you chose various different fines structure you would find something different. Here's the theorem:

Mutatis mutandis you can also show that the result holds in fixed point arithmetic.

Not the answer you're looking for? Browse other questions tagged reference-request quadrature or ask your own question.

9
What are the strategies for local Adaptive Mesh Refinement (local AMR) on unstructured meshes?
5
Is there a special algorithm for computing the convex hull ordering when the candidate points are on the hull?
2
How to estimate the error of trapezoidal rule using discrete data?