While answering one of the questions on meshing process, I encountered a lack of understanding on my end for the comparison of the mesh quality.

First, consider an unstructured mesh created in GMSH for a 2-D shape (I am not interested in this particular shape, just here for the illustration). The elements are controlled only through the characteristic length, which basically dictates, how many elements are created along the geometry boundaries.

Now, I can detect the regions in the mesh that are "kind of suitable" for a structured mesh. That could be done automatically, say, using marching cubes.

Now, both meshes satisfy the original criteria for the size of the element. But the second mesh has a lot of elements that are exactly the same - allowing for significant savings in the required amount of computations while featuring a similar number of triangular elements (even a little bit less).

Is the second mesh bad in general? Does a lot depend on the kind of basis functions that will be used?

Now, I am particularly interested in using the meshes in frequency-domain computational electromagnetics, where the common meshing is done at $\lambda/10$, $\lambda$ is the wavelength. Say, both meshes satisfy $\lambda/10$ requirement (largest triangular edge is smaller than $\lambda/10$). Is there something fundamentally bad by using this type of a hybrid structured/unstructured mesh?

NB: I am usually using integral-equation methods; however, don't mind having an understanding of what happens, in general, and for FEM and others, in particular.

In my opinion, it is not a good neither a bad mesh. It clearly depends on the PDE you are considering.

Elliptic problems do not suffer from problems associated with the mesh, in terms of isotropy/anisotropy because the nature of the associated operator (Laplacian) is isotropic (invariant under translations and rotations), therefore your mesh would be suitable for elliptic problems.

However, other operators like the $\vec{\textrm{grad}}$ depend strongly on the mesh, because they are anisotropic (depend on the direction). This fact is important if you are going to project a hyperbolic equation (Fluid dynamics) onto your mesh, where a prevailing direction arises and thus the solution is affected.

As an example of these matters try to compute the following problems with these two meshes:

Problem 2) Solve, for example, the hyperbolic problem $\partial_t u-(\vec{v}^{T}\vec{\textrm{grad}})u = 0$ with $u=g(t)$ and $u(0)=0$ in the inflow boundary, in the two meshes (with $\vec{v}$ in the orthogonal/parallel direction of the boundaries). Use for example finite volumes of second order. Compare them. Now solve both problems with $\vec{v}$ entering the domain with a certain angle. Compare them again.

In problem 1) you won't see great changes in your solution, while in problem 2, the orthogonal mesh is really suitable when solving for $\vec{v}$ oriented perpendicularly to the inflow boundary but misbehaves for an arbitrary angle (clearly the problem is not isotropic). For the triangular mesh, you shouldn't note such a great difference, because a certain anisotropy is already introduced by the mesh.

I think that both meshes are good. But depending of the problem at hand, one might be better than the other. In the domain that you are mentioning, one thing to consider is that you probably don't want element sizes to be too different to satisfy the sampling criterion.

Regarding mesh quality I would suggest that you check this post:

And, if you check reference 1, you would see that depending on the problem at hand some criteria would be better than others, anisotropy in your might be a good thing , for example. You would like to have a finer discretization in directions with higher derivatives (gradients).

Regarding the meshing of the geometry in your example. I would probably go with something like the following 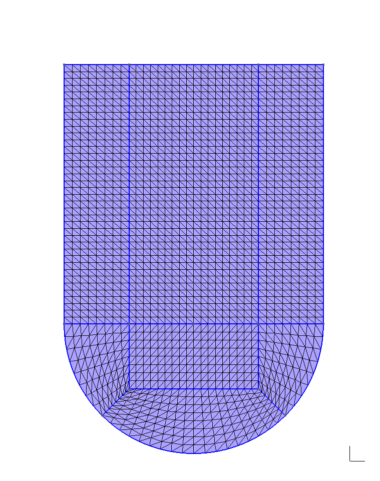 where I have fine tuning over discretization levels for different regions. Thus, I can refine wherever I find it needed according to the solution for a coarser mesh.

Not the answer you're looking for? Browse other questions tagged finite-element mesh-generation integral-equations unstructured-mesh or ask your own question.

3
Looking for a library or algorithms to perfom clipping 3D unstructured meshes by a set of surfaces
11
How to interpolate multipoint data to the cell centres of an unstructured mesh?
4
Is there a mesh generator that will generate zero thickness elements for interfaces?
2
Convert Unstructured Mesh to Structured
1
C++ library unstructured mesh writer to VTK format (or similar)
2
Is there any fundamental difference between meshing for FEM, FVM and FDM?