The other important relationship to note is that the fluid pressure $P$ (which appears in the horizontal momentum equations) is related to the concentration $c$. Specifically, $P$ depends on the fluid density $\rho$, and $\rho$ is related to $c$ through an algebraic equation of state. So there is two-way coupling between the hydrodynamic equations and the transport equation.

After these three steps, I have all the variables we are looking for at the next discrete time value for all spatial coordinates in our grid. So I repeat these three steps to march in time.

This solution procedure might be seen as a first-order operator splitting schemes, since the hydrodynamics processes (equations (1)-(4) and steps 1-2) are solved separately from the transport process (equation (5) and step 3). Should one expect to gain any sort of advantage (e.g., in computational efficiency) by implementing second-order splitting schemes (e.g., from this webpage: http://www.asc.tuwien.ac.at/~winfried/splitting/)?

The experiments are run on a lock-exchange problem that is similar to the one found in [Shin et al. 2014]. Initially, the left-half of the flume (with length 2 meters, width 0.2 meters, and depth 0.2 meters) is filled with saltwater, the right-half is filled with freshwater, so there is a sharp interface in the middle at $t = 0$. The barrier is instantly removed, so the dense saltwater flows beneath the less-dense freshwater. The fixed uniform mesh that I use to run my experiments is relatively coarse (grid spacing is 0.2 meters), but I don't think this matter since I am only interested in temporal convergence. I roughly measure computationally efficiency by plotting the discrete $L_2$ error versus the wall-clock time of the simulation. Below is an example of one such plot (split1 through split5 correspond to different implementations of second-order splitting schemes, while split0 corresponds to first-order splitting). Note that the "reference solution" used in this discrete $L_2$ error measurement is actually an approximate solution to the semi-discrete system, which is computed using a very small time-step size of 0.01 seconds. Also, I am specifically looking at the error in salt concentration $c$. 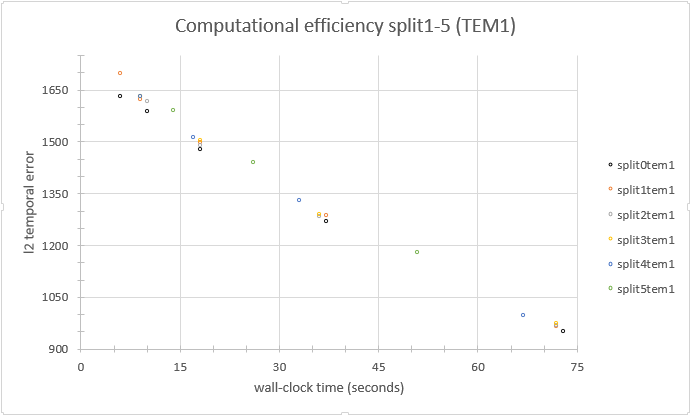 Looking at points which are vertically aligned, you can see that the black points (first-order splitting) achieves an $L_2$ error which is roughly the same as the $L_2$ errors computed using second-order splitting (in fact, they are a little better).