A robust algorithm to sort a non-convex polygon vertices

I am looking for a robust algorithm to sort the list v_{0},...,v_{N-1} clockwise/counterclockwise in respect of P_{0}. I know that, if the polygon is convex, the following algorithm works well:

I am wondering if exist an algorithm able to deal with all kind of polygon, also non-convex.

As @HighPerformanceMark mentioned in the comments if the set of vertices $V=\{v_0,\ldots,v_{N-1}\}$ is the only information you have about your non-convex polygon, you did not define it uniquely. One can find a non-convex polygon defined by $V$, but not the one.

Below, is the example (certainly non-minimal, but that is the first I drew) of two different six-sided polygons defined by exactly the same set of vertices. In polygon $S_A$, the vertices are ordered counter-clockwise, while $S_B$ is not so lucky. 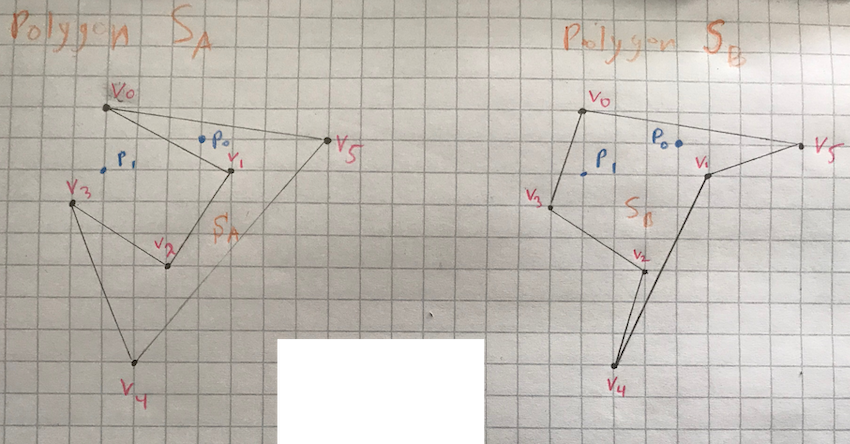 So, in order for an algorithm to work, you will either get some non-convex polygon (in this example, $P_0\in S_A, S_B$; however, $P_1\in S_B$, but $P_1\notin S_A$), but I can hardly imagine an application that allows for non-uniqueness. Or provide some additional information about your "desired" non-convex polygon – and list of edges come to mind right away. When the edge list is present, you probably don't need that algorithm in the first place, or the reordering becomes trivial by traversing the edge list.

Not the answer you're looking for? Browse other questions tagged computational-geometry fortran nonconvex sorting or ask your own question.

7
Algorithm for dealing with medium-size non-convex QCQP
0
Non convex optimization
1
Convex Polygon Intersection
1
Find area of a polygon. In C and Obj C.
4
non-convex quadratic with only one quadratic constraint?
3
Subgradients of non-convex functions
4
Optimization of non-smooth, non-convex, locally Lipschitz functions of type exp(-abs(x))
2
Is there an optimization scheme/algorithm that converges, for this non-convex scenario but with some special properties