How to calculate the geodesic curvature of a discrete 3D curve?

I have coordinates of a set of points that form a closed loop that lies in a 3D surface. I know the equation of the surface and I can calculate it's surface normal at any point. I found that for a unit speed curve $\alpha(t)$ I can calculate the geodesic curvature as $$ \kappa_g(t) = \alpha''(t)\cdot (n(t)\times\alpha'(t)) $$

So my algorithm for calculating the geodesic curvature at any point $P$ of this curve should be as follows:

Is my algorithm correct? I am not clear about how to get arc-length parameterization from the points on the curve.

Are there any standard algorithms (or even Python libraries) for such a calculation?

UPDATE 1: I implemented @Futurologist 's wonderful answer for the test case of a circle on a cone as shown below 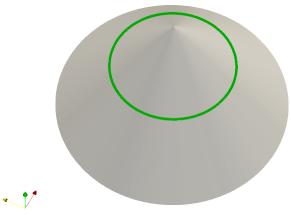 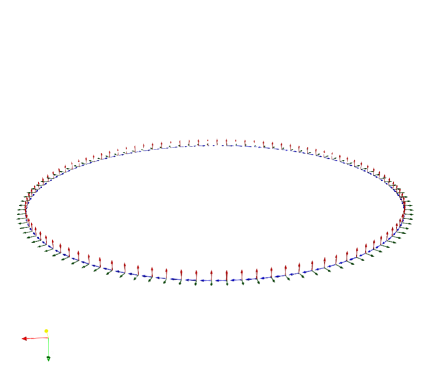 The total curvature at each point on the circle is $k_i = 1.0$ which is correct because I designed the circle to have a radius of $1.0$. I get the geodesic curvature at all points as $-1/\sqrt{2}$. So everything looks good. Can someone confirm if the sign of the geodesic curvature or the $N_i$ vectors in the TNB frames are correct? I know that I can flip it by changing the order in the cross-product for $b_i$ but I am asking if there are is standard convention.

Why don't you try something geometric rather than numerical. I propose the following approach.

8
How to calculate the area of intersection between a 3D volume and a 2D plane
3
How to determine if a point is outside or inside a curve
2
Monte Carlo Double Integration Implementation
1
Calculate the area and perimeter of a hand-drawn shape
4
Optimally "morph" one set of points into another
2
How to divide points on a 3D complex surface into two regions based on a closed curve defined on this surface?
1
Calculate the arc length of a Steinmetz curve numerically
4
Computation of the tensor of curvature on surface mesh