I have data with peaks on some background, for example: 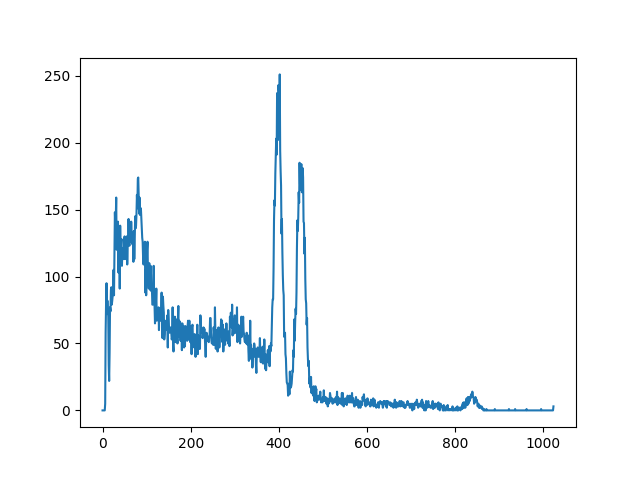 The two prominent peaks at ~390 and ~450, as well as the much smaller peak at ~840. What are some options to programmatically find the position (i. e. the x-coordinate) of such peaks using Python/SciPy?

scipy curve-fitting signal-processing
Share
Improve this question
edited May 28 '19 at 17:38

Fitting the peaks of gamma spectra is a typical task in non-destructive analysis of spent fuel or neutron activation analysis. Since these applications are already "quite old", there is some standard software available, like Genie 2000. A paper Evaluation of Peak-Fitting Software for Gamma Spectrum Analysis from 2015 compares a number of these tools. However, most of them are commercial.

All methods are based on the concept of "base functions", typically Gaussian functions, that are used in a linear combination. The two main problems are then to estimate the number of peaks and to estimate their locations. Both are done using prior knowledge: what does the user think is present in the sample? Once this is done, a non-linear optimisation algorithm is used (Levenberg-Marquardt) to minimize the error between the fit and the measured data. But, as mentioned by EMP in a comment, a lot of this is in the eye of the beholder. Most commercial software have a GUI that allows the user to interact with the code to "tinkle until convergence" (where convergence means "it fits according to my human eye and according to what radioactive species I think I have in my material").

A paper describing a non-linear fitting procedure using the Levenberg-Marquardt method can be found here. This will give you some of the mathematical background. This paper "Peak fitting and identification software library for high resolution gamma-ray spectra" also gives some mathematical background. An older report describing this problem can be found here. Based on the latter and the available solvers in SciPy, you should be able to roll your own code.

That looks like a spetrum (of x-rays (?)). If you have any a-priori information about where you expect your peaks to land, you might give your fitting algorithm that information. E.g.: "fit a gauß peak between 390 and 415". That's a little ugly because you'd have to hand-code those ranges, but at least you can re-use it on scans later on automatically.

Not the answer you're looking for? Browse other questions tagged scipy curve-fitting signal-processing or ask your own question.

5
Solving a system of nonlinear PDEs by minimization
0
How can I use Scipy to fit data generated from a C++ model?
8
What does Python offer for distributed/parallel/GPU computing?
9
Matrix Balancing Algorithm
3
Plug-and-go Clebsch-Gordan computation in python?
0
Find shift in high resolution noisy signal if only local argmax data are available