Should we always expect FEM error plots to be straight lines?

The error estimates in FEM are usually of the form

Taking logarithm on both sides, we obtain

Then, why is it that most error plots which are published in journals show a very sharp straight line for the error? I would be grateful for some insight into this question, as I am a novice to scientific computing.

Edit: In the picture below, theoretical results show that the error (plotted on the y axis) should decay as $1/R$ where $R$ is plotted on the x axis. The second figure is in the log-log scale. 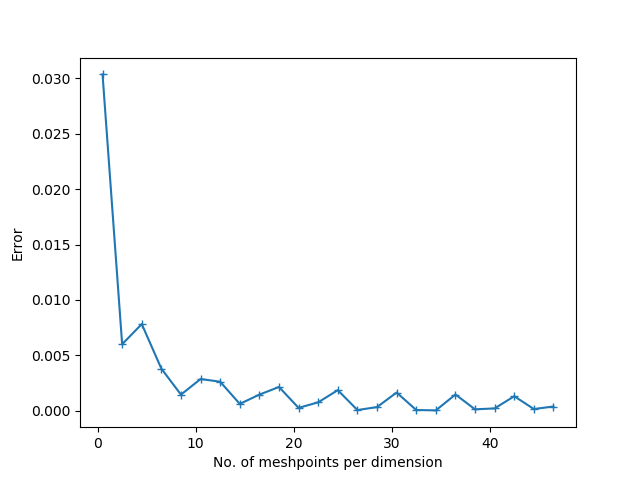 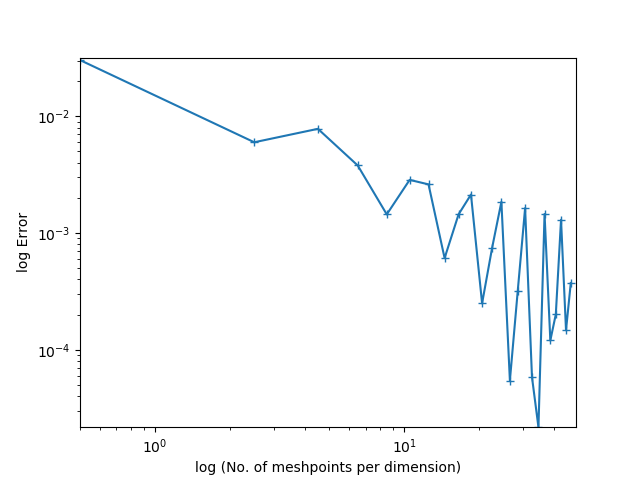 While I cannot comment your particular case as you didn't provide enough details, I can give some guidance on the matter since I've spent several years of my life trying to make these convergence graphs look as nice as possible. I've only worked with elliptic and saddle-point problems and the guidance probably doesn't apply to parabolic and hyperbolic problems at all.

One thing should be clear already from the comments: there is no reason whatsoever for the graphs to always look like straight lines if you have an upper bound for the error.

Another thing to realize is that such error estimates are usually satisfied by some generic set of problems where the boundary and loading data is specified as an element of a Sobolev space. Thus, there are in reality lots of problems with different loadings, boundary conditions, etc. that satisfy the same estimate—typically with a different constant. When numerically solved on a sequence of meshes, only some of the problems stay near enough the asymptotic limit—as defined by the estimate—for the graphs to look linear.

A third thing to notice is that many times you have multiple asymptotic limits in place, e.g., from different boundary conditions, singularities, and varying regularity of the data. Obviously the estimate with the smallest power of $h$ will dominate in the limit $h \rightarrow 0$ but it is sometimes hard to know that when the other estimates still have an effect. This range where the non-dominating estimates still have an effect is sometimes referred to as the preasymptotic range.

Artificially making the preasymptotic range as small as possible and finding problems that mainly stay near the asymptotic limit is more of an art than a science. Here are some tips:

In general, I think the error estimates are more useful when checking that your newly implemented finite element code is working correctly and not so useful for applied problems where the data and the boundary conditions are not necessarily nice enough for you to get linear convergence graphs.

Not the answer you're looking for? Browse other questions tagged finite-element convergence or ask your own question.