I'd like to know how Ansys computes the slope (=stiffness matrix) at point x1 in figure. I'm studying the way in which Ansys uses the Newton-Raphson method when there are nonlinearities.

In the slide there is the specification that we don't know the real curve F-x, thus I have some problem to understand which slope is taken at x1 by Ansys. 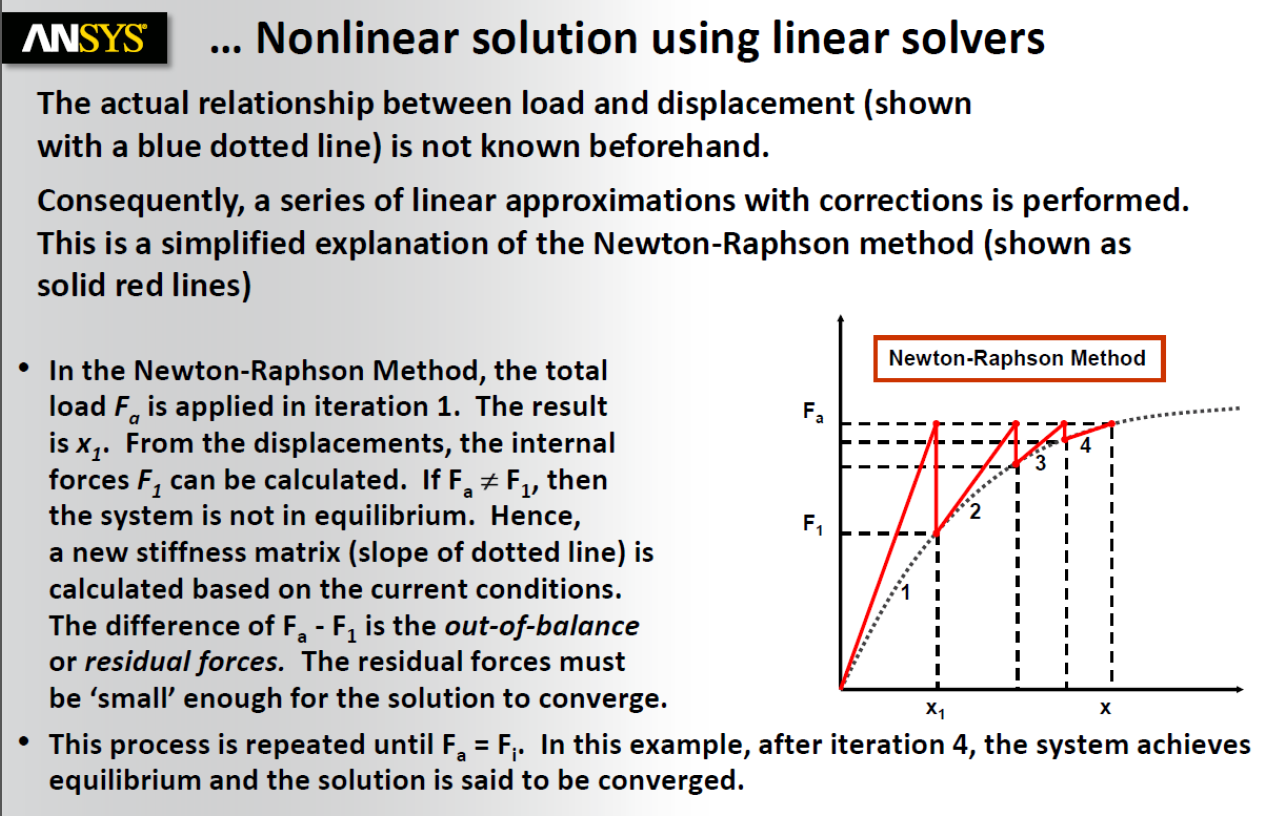 Thank you so much for your time.

I can't speak for ANSYS specifically, but one of the most popular families of Newton's method are Newton-Krylov methods. In higher dimensions, one has to solve a linear system using the Jacobian, or stiffness matrix in this case. Krylov-based methods are a popular method for Newton's method because Krylov methods actually don't require you to know then entire stiffness matrix, you only have to be able to compute the product of the stiffness matrix with a vector. This can be approximated with a finite difference like so: $$ J(x)v\approx \frac{F(x+hv)-F(x)}{h}, $$ where $J(x)$ is the Jacobian matrix of $F$ at $x$. This is great for these solvers because by using a Krylov method to solve the linear problem in Newton, you don't ever have to explicitly compute a Jacobian matrix.

Again, this is not specific to ANSYS but this is a popular implementation that is very flexible and can accommodate lots of problem-specific features to increase performance.

The slope taken is linearized version of equations presented in the model. Linearization usually is implemented by removing non-linear parts: instead of those their differential expressions were to be used $f(x) \approx f(a) + f'(a)(x-a)$. That is shown on the picture. That differential $f'(a)$ in question could be computed by interpolation techniques, which is separate (complex) task. Then you solve the equation, with usual methods (linear algebra approach). Then after solution is found, again you recompute all differentials. And so on.

But they are also use the confusing words. Namely "forces". Forces are actually used, but in numerical methods it is special "forces", in optimization algorithms, where no actual forces are present. And existing "exact" system is substituted by differential system with moving "points", for example so-called "model of heavy ball".

If they are solving optimisation problem, for example find the point of balance in system, then do not misinterpret these "forces" with actual mechanical forces.

Also note, that in special applications there is no much need in knowing the stability region of the system, but to understand the borders of this region. So optimization/nonlinear solving algorithms could introduce "energy pumping" into the system, to find out the points of maximum fluctuations. Of cause it may be chosen to (or may not) be analogous to actual Newton laws governing the mechanical equations. That "pumping" also does not have anything to do with actual physics, but is a set of methods having its roots in theory of dynamical systems.

Not the answer you're looking for? Browse other questions tagged finite-element iterative-method newton-method solid-mechanics education or ask your own question.