How to solve calculus of variations problems numerically?

For example, how to solve the well-known isoperimetric problem (i.e., to enclose the largest area with a fixed-length curve)?

How to directly solve it without applying the Euler-Lagrange equation? It's a classic optimization problem, right? A quick search leads to Euler's finite difference method and Ritz's method, and some examples with fixed-end constraint. So I guess the fixed-length constraint should be handled via Lagrangian multiplier.

Are there "better", more state-of-the-art method? Also are there numerical packages that can take an integral objective and some arbitrary constraints, and give you the solution without much user intervention?

In the specific problem you ask about (unlike Richard's more general answer), it turns out that you can relax the $=$ constraint into a $\leq$ without changing the optimal value, and that the resulting convex problem can be solved with the CVX software Richard mentioned.

Details: Intuitively the relaxation is possible since if the function had arc length strictly less than $L$, you could scale it up to have arc length $L$ exactly, but scaling the function up will necessarily increase the integral. As a result, if we solve the optimization problem with a $\leq$ replacing the $=$ in the constraint, the optimal value and function $y(x)$ is the same.

The following Python code gives an example of solving this problem with the CVXPY software Richard mentioned:

The solution (found at y.value) is given as follows: 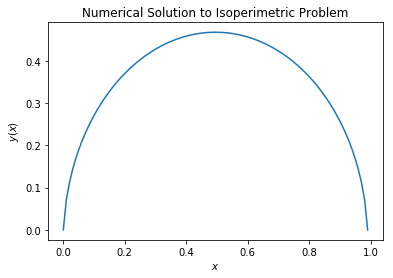 As Richard points out, you can't hope to be able to add generic constraints to this problem and continue to have access to a simple and/or efficient solver. Nevertheless, you can add convex constraints like this arc-length one in a pretty straightforward way without too much trouble. For example, the following gives the output of the same optimization problem if I now add the constraint $y(1/2) \geq 0.55$: 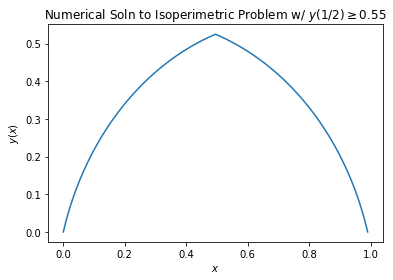 I think the meat of your question is:

Are there numerical packages that can take an integral objective and some arbitrary constraints and give you a solution?

The answer is: mostly, no.

However, a few packages, such as GPOPS, JuMP, and PyOMO, have facilities for this which sometimes work if your problem is of the right form.

For particular classes of problems there are excellent solvers, but arbitrary constraints allow you to actually build quite a bit of complexity into a problem pretty easily. Consider, for instance singular control problems.

For instance, if you constrain a variable to belong to a set, then your problem becomes an integer program. Those are in the NP complexity class, so we don't and probably won't have good, general-purpose algorithms that solve all instances.

If the function you're integrating curves the wrong way you move from having a convex program (usually solvable easily) to a non-convex program, where, again, there's not a general algorithm. Or, if you have a case-based function, then you may no longer have smooth or continuous derivatives.

Even if your problem happens to fall into a class of instances for which we have good algorithms, you have to explain that to the computer. Packages like cvxpy require you to write your problem using a disciplined library of functions which not only restrict you to solvable instances, but which actually constitute a recipe for the solver to follow.

Not the answer you're looking for? Browse other questions tagged optimization constrained-optimization variational-calculus or ask your own question.

3
Enforcing bounds and equality constraints for convex optimization
1
Is it possible to use both the absolute value and the actual value of a variable in a linear objective function?
2
How do I solve the matrix equality constrained optimization problem using Lagrangian multipliers?
1
How to best code a problem with scipy, cvxpy or Convex.jl with given generated data