During my PhD work, I had to use tabulated values of thermodynamic properties of gases in some Computational Fluid Dynamics (CFD in short) simulations.

My tables are discretized in temperature and pressure (which are the independent variables) as reported in the scheme below: 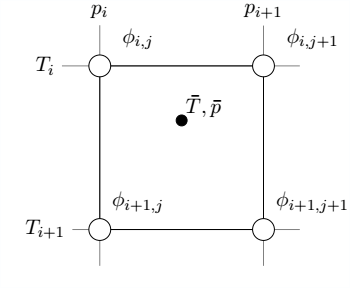 So I had to reconstruct an approximation of the general quantity $\phi$ for arbitrary couples of $p$,$T$ so that the CFD solver could retrieve them during the calculation.

Doing so with a simple Bilinear approach, works quite well for single species gas, but, when it comes to using mixtures I've observed really poor convergence rates and non-physical solutions.

The local bilinear approach it appears to be thermodynamic inconsistent: Maxwell relationships are not respected when thermodynamic quantities are independently interpolated.

On the other hand, using a consistent interpolation approach, such as a Hermite polynomial basis, everything works well without particular issues.

I would like to know if anyone has ever experienced such kind of problems, and if you have some ideas on the role of Maxwell relationships in non-ideal and compressible fluid dynamics.

We've been going back and forth in the comments and thanks for adding so much more information.

So the first thing I'm noticing is that if you have many variables, but they depend on each other through equations of state and other equations they are therefore coupled. I think it's best to interpolate the minimum number of variables required (maybe temperature and pressure) and then use your additional equations of state to calculate the other variables. Otherwise, you can end up with some nonphysical states when you interpolate every state. This should help keep your Roe states more feasible. Think about the example where you have a table of the values for the equation $y=x^2$, if you want to know the value at x=3.5, you should evaluate $y=x^2$ at x=3.5, not interpolate between the values of y at 3 and 4.

Furthermore, as you point out, the derivatives aren't continuous, maybe expand the stencil, and keep the interpolation $C^1$, so that any derivatives you have aren't jumping around like crazy depending on small changes in T. If you are using a strong solver (like Newton-Krylov), it uses the jacobian, and the derivatives of this interpolation would be jumping all over the place, as would the residual calculation (this can also be an issue with limiting the gradients in CFD solvers, and shows itself in the simulation never converging).

Not the answer you're looking for? Browse other questions tagged fluid-dynamics interpolation convergence or ask your own question.

10
Why do we have to rerun the CFD solver for higher Reynolds number?
4
Properties of a Shockwave in Fluid Calculations
3
Simple CFD method
2
CFD mesh generation
0
zero pressure gradient flat plate CFD++
5
What makes turbomachinery so special in CFD
3
Where do I begin learning CFD?
0
maltab ode solver- user defined criteria to stop calculations
0
How to represent CFD result when I use grid-centered FVM?