I'm trying to educate myself on modelling solute flows through pipe networks.

While modelling flow through pipe junctions, I understand that the junction is assumed to have complete mixing, negligible volume, and algebraic equations are written for mass conservation. 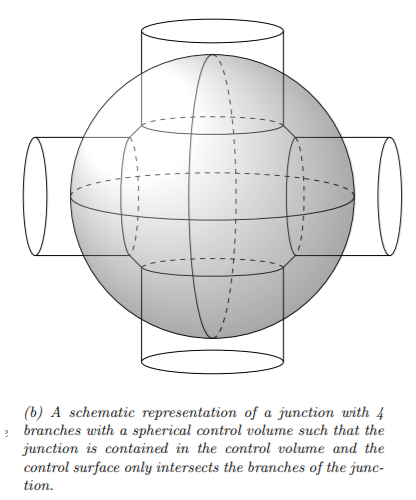 This really confuses me. On one hand, the velocity of fluid flowing in each branch of the pipe is computed with the assumption that there is no accumulation at the pipe junctions using the continuity equation (Inflow rate is equal to outflow rate). Wouldn't the velocities obtained by solving the continuity equation be wrong if the nodes are assumed to have spherical volume?

Obviously from the picture it seems the variation of concentration in the junction itself might be considerable that lead the authors to consider a spherical control volume at the junction. When you ignore the volume of the junction and consider it as a point and write the mass balance equation as an algebraic equation of balance of incoming and outcoming fluxes, you make an assumption that the concentration gradient at the junction (remember any real junction is not a point and certainly it has a volume) is negligible, which might not be the case in your application.

In fact, by considering a volume for junction you assume that junction does not exchange incoming and outcoming fluxes immediately and also it needs sometimes to transport the mass based on diffusion or convection. For really small junctions in comparison to the volumes of the pipes, this junction delay time might be extremely small and that's the reason why people assume the junction is just a volumeless point. But, if the junction has a comparable volume to the pipes themselves as you show in your picture, you need to solve convection-diffusion equation even at the junction.

Yes but that's not the case here cause junction has a volume right now and it takes sometimes to transport mass or momentum. For momentum transport it might be less important cause usually $Sc=\frac{\nu}{D}$ Schmidt number is in the order of 1000 for typical fluids and it means momentum is transported 1000 times faster than mass, so you may ignore the volume of the junction for the velocity safely but not for the mass transport.

Based on OP's actual application for capillary blood vessels, I think it's pretty straightforward to define spherical volume of junction by considering the Maximum Inscribed Radius of all branches as is shown here to give you an idea of what would be spherical junction in case of even patient-specific blood vessel geometries (specifically look at the sphere in the right image at the junction of those three branches): 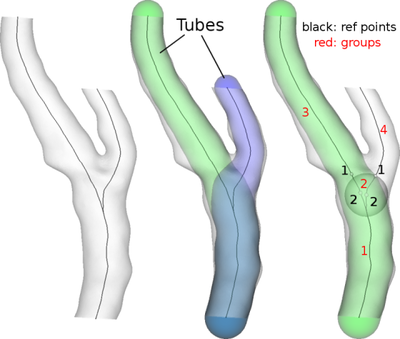 Not the answer you're looking for? Browse other questions tagged pde fluid-dynamics numerics numerical-modelling or ask your own question.