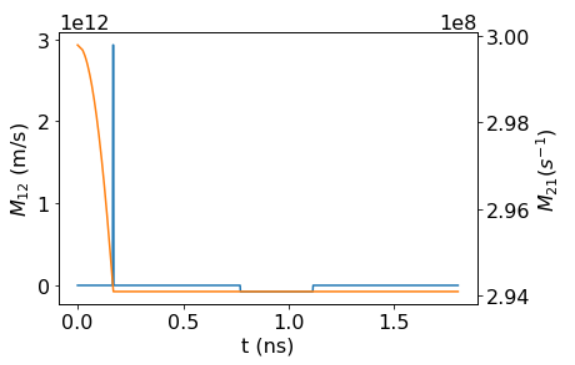 Blue line is on the left axis, orange on the right. I'm using scipy's implementation of Runge-Kutta 45 in python to solve the ODE and have an array of $A(t)$ and $B(t)$ before I start (IE it's not a function, but derived from arbitrary sampled data).

I can get an accurate solution as long as I impose a small enough max_step parameter to catch the quick changes, but this takes a long time and I'm in a performance sensitive application. As an example, I need ~100k function evaluations for this function to have decent convergence (1E-4 accuracy). Of course the solver is wasting a huge amount of time/function calls in the regions where the coefficients aren't changing. I also have the arrays of coefficients before hand and in a sense already know where the trouble spots are and should be able to tell the solver about them before hand.

My question is: how do you efficiently solve an ODE with impulsive coefficients? Alternatively, is there a better way of solving the ODE on sampled data than using RK45? I simply interpolate the coefficients and pass it to the solver like a continuous function, but I'm not sure what others would recommend.

Edit: Another thought, is there a way to solve this ODE in quadrature kind of like how the solution to $y^\prime(x)=f(x)y(x)$ is just $e^{\int f(x)dx}$? I can't see an easy way even through diagonalizing $M$ because it depends on $t$, but who knows? Actually, does that equation hold for matrices w/ matrix exponentiation? It's not as simple as that, is it?

I would recommend 3 things to pursue:

The phenomenon you're dealing with here is called a "stiff system". Check here for a full explanation: http://www.scholarpedia.org/article/Stiff_systems

Matlab’s ode45 is a non-stiff solver, thus ill-suited for your problem. You should try to use one stiff solver. Matlab has 4 stiff solvers but other tools like Scipy’s solve_ivp also possess non-stiff solvers as well: https://docs.scipy.org/doc/scipy/reference/generated/scipy.integrate.solve_ivp.html

Julia also has solvers for stiff problems, for more details please refer to Chris Rackauckas' comment to your question above, since he is THE expert on the topic.

Not the answer you're looking for? Browse other questions tagged matlab python ode integration or ask your own question.