I can see that in deal.ii there is a class named FEInterfaceValues and probably what I am asking is what its function dofmap is actually doing, but I don't understand the implementation. 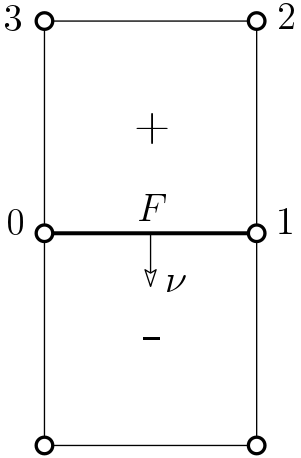 You go the grouping in the term $\nabla u^+-\nabla u^-$ mostly right but not quite. To see this, remember that the functions $\phi_i^{\pm}$ are discontinuous, and that consequently $u_0^+$ is not necessarily equal to $u_3^-$ -- if they were, you'd end up with a function that is continuous at that point. Instead, you need one degree of freedom per adjacent cell at each vertex.

What FEInterfaceValues does is pretty much the following: For a face, it gathers the indices of all of the shape functions that live on the neighboring cells. In your case, that's 8 shape functions, and so when assembling these jump terms along the face, you'll have to compute an $8\times 8$ matrix of jump contributions to the global matrix. But if you had, for example, continuous elements, there would only be 6 (unique) degrees of freedom adjacent, and so the dofmap variable would only contain 6 entries (of the global indices of the corresponding degrees of freedom).

Not the answer you're looking for? Browse other questions tagged finite-element numerics discontinuous-galerkin deal.ii or ask your own question.