How to solve system of equations with almost-zero determinant?

I have a system of equations that I am trying to solve. In matrix form, it's written as

I am solving for $x$, where $I$ is the identity matrix and $S$ is a matrix where each column sums up to one. $b$ is strictly positive.

Now, unfortunately, the determinant of $I - S$ is very small. Inverting it leads to a matrix that is huge everywhere, and even numpy.linalg.solve comes up with a solution for $x$ that is huge (every element around e+19). What is an alternative way of solving this? The matrix itself is not large, there are around 30-50 elements in $x$.

You cannot solve what has no solutions

That matrix is singular, so the system has either zero or infinite solutions. In the case of your system, I think some Perron-Frobenius theory can be used to prove that there are zero: there is a non-negative vector such that $Sv=v$, hence $0=x(I-S)v=bv > 0$, contradiction. (Those $x$ and $b$ are row vectors, right?)

Basic linear algebra states that $\det(I-S)$ must be non-zero so that a solution to your linear system exists. On the other hand, if your determinant is (numerically) zero, the basis vectors in your coefficient matrix $(I-S)$ do not span the whole vector space, so that you can't construct a general right-hand side $b$. Think of this picture: 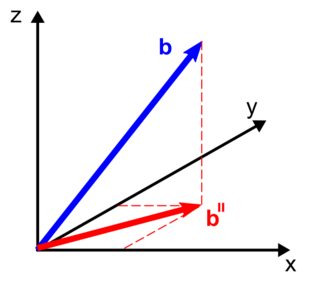 In the example, the rhs $b$ is a 3D-vector with a $z$-component, but the vectors in the coefficient matrix only span the $x-y$-plane. So, the best you can do is to reproduce the vector in the $x-y$-plane, and forget about the $z$-direction. That is, you essentially solve for the projection $b^{||}$ of the vector $b$ onto the $x-y$-plane. By this you determine only two of the three parameters $x_1$ and $x_2$ in your solution vector. The third parameter $x_3$ can't be determined and is usually set to zero (such that $||x||$ is as small as possible).

To accomplish this, there are several regularization methods available. The two basic ones are the SVD and ridge regression:

In the limit $\alpha,\epsilon \rightarrow 0$, both methods give the same result, namely the solution in the subspace that is spanned by the vectors in $(I-S)$.

By the way, to clarify: this is no solution, but an approximation to the solution. So the answer of @FredericiPoloni still holds. This here is just a workaround.

Not the answer you're looking for? Browse other questions tagged linear-algebra probability or ask your own question.

7
computing the determinant of a dense nonsymmetric 100x100 matrix having very big and very small eigenvalues
2
About Subspace Iteration for Eigenvalues
3
How to solve a Linear Matrix Equation: AX-XA=B efficiently?
3
GSL linear algebra LU/determinant precision
5
Efficient algorithm for a matrix product
2
Set of linear ordinary differential equations with a mass matrix
1
Why Householder transformation can not be chosen to be an identity matrix?